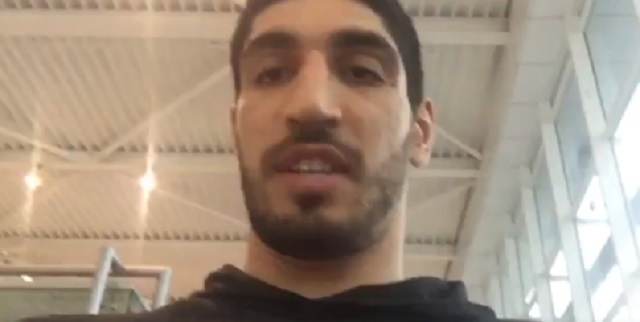 Oklahoma City Thunder center Enes Kanter, who has been an outspoken critic of Turkish President Recep Tayyip Erdoğan, is currently being detained in Romania after the country reportedly revoked his passport.

Here is Kanter explaining his situation on social media.

I'm being held at Romanian airport by Police!! pic.twitter.com/uYZMBqKx54

“What’s up, world? Just wanted to say we are in Romania, and they said they canceled my passport by Turkish embassy. You know, they been holding us here for hours by these two police. [Kanter rotates his camera towards the officers]

You know, because the reason behind it is just of course my political views, and the guy who did it is, you know, Recep Tayyip Erdogan, the president of Turkey … he’s attacked people in Washington. He’s a bad, bad man. He’s a dictator, and he’s the Hitler of our century. So I will keep you posted, guys, but just pray for us, and I’ll tell you guys what’s going on. Appreciate it.”

Turkey revokes passport of @okcthunder's star while in Romanian airport. He is facing deportation to Turkey, where he'll likely be arrested. https://t.co/Pglqvxu5IV

Kanter has a history of opposition against Erdogan and has been disowned by his family for supporting the Turkish President’s rival.

In August of 2016, Kanter was disowned by his family, which still lives in Turkey. The Daily Sabah, cited as a “supportive voice” of Erdogan’s party, quoted Kanter’s father, Mehmet, as saying he disowned his son for his affiliation with the Gulen Movement. Fethullah Gulen is an Islamic leader who has been in exile in Pennsylvania for more than 15 years who is in direct opposition to Erdogan and his reign over Turkey. Erdogan’s regime blamed Gulen for an attempted coup on the Turkish government in July 2016.