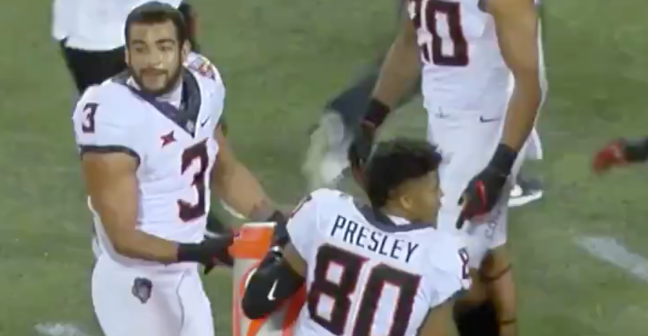 Postgame victory baths are a tradition that many people believe began on October 28, 1984. The New York Giants beat the Washington Redskins 37-13 and offensive lineman Jim Burt showered Bill Parcells from a water cooler as a means of payback for how Parcells treated him throughout the week. It has since become a staple in after any big win, including the vast majority of college football bowl games. No matter whether it’s the national championship, or a game between two six-win teams, the bath is imminent.

To make things even more fun, college football takes it to another level. For the Idaho Potato Bowl, the winning coach has a cooler of french fries poured over his head, and for the Cheez-It Bowl, he dons a downpour of the cheesy crackers. Oklahoma State head coach Mike Gundy was the lucky recipient of the Cheez-It bath this year, but it took some time to get it done.

The No. 21 Cowboys held off a second-half comeback from the No. 18 Miami Hurricanes to win 37-34, and redshirt junior safety Tre Sterling III and freshman wide receiver Brennan Presley grabbed the cooler. Sterling had a team-high 13 total tackles and Presley had six catches for 118 yards and three touchdowns in the game, but they struggled to keep the great night going as the clock wound down to zero. The two ran onto the field and hilariously lost track of their head coach before they eventually found Gundy and gave him the Cheez-It bath.

It took them a while to find Coach Gundy for the Cheez-It bath 😂 pic.twitter.com/4fWw4RcpFB

This was not the first time that this happened, or at least appeared to have happened. An unranked Ole Miss beat No. 6 LSU at home in 2013 and offensive linemen Patrick Junen and Jared Duke set out to give head coach Hugh Freeze a true Gatorade bath. However, as they ran onto the field, it looked as though they lost track of their target and the blunder was caught on camera.

While it seemed to go down one way, the truth is that it was not a fail. Junen, a rocket science for NASA, and Duke, a doctorate student, are not dumb. They spoke about what happened after the fact and it was a deliberate pause. They located Freeze, but he was with his family and the reporters, causing hesitation (out of kindness for those around the coach) that left a poor visual.

Notice how espn includes them finding the coach. @PJunen and I were not given such grace by @SportsCenter years ago. https://t.co/OEkQge8GFh pic.twitter.com/SpvlyAjRuh

No matter how long it took, both Freeze and Gundy received their respective baths and that’s what matters. May the tradition never waver.