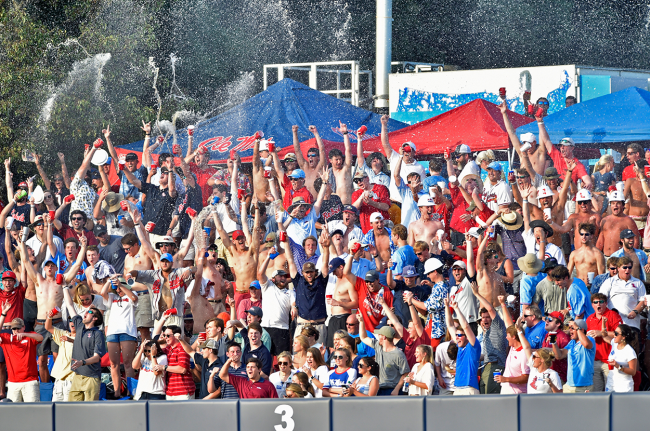 College baseball season is officially upon us. As the MLB continues to self-destroy itself from the inside, the collegiate game is getting its moment to shine.

There is no better way to showcase the sport than a beer shower in Oxford, Mississippi. Ole Miss has the best college baseball atmosphere in the country and a recent viral video shows exactly what makes it so great.

In the south, college baseball can be considered more of a religion than a pastime. Ever school has its unique, individual traditions and the Rebels have the best one.

Beyond the right field fence at Swayze Field is the student section. Anyone is welcome, but it is 99% students.

Every year, prior to the season, students camp out overnight for the chance to rush right field and set up their tents and lawn chairs for the entire year. This season’s iteration of the ‘Right Field Rush’ was a little bit more subdue than usual, but it was still electric.

Over the weekend, the fruits of their labor were in full effect.

Ole Miss had the second-largest Opening Day attendance in school history as the Rebels played host to the Charleston Southern Buccaneers. Saturday’s attendance was the eighth-largest ever.

In right field, it is BYOB. Coolers are permitted and you can bring in as much alcohol as you can carry, so long as it is not in a glass container.

The drink of choice, of course, is cheap, domestic beer. And in Oxford, when the home team hits a home run, any beer that is left in your cup ends up in the air.

Ole Miss’ first home run of the 2022 season came from its sixth-year captain who played the second half of last year with a torn ACL. It couldn’t have been written any better and the beer went flying.

On Saturday, he went yard again. The ensuing beer shower was even better than the one on Friday.

POV video of the beer shower from the second Elko tater made its rounds across the internet and it is truly glorious.

Imagine going to literally any other school pic.twitter.com/yLJ6h37FJb

The beer shower is the best tradition in college baseball and there is not another school in the SEC or across the country with anything that comes close.