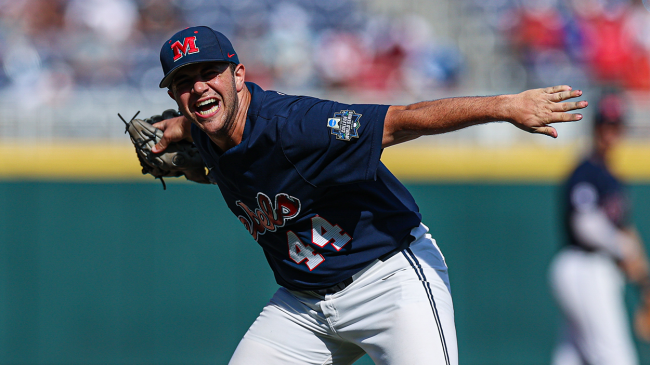 Ole Miss baseball pitcher Dylan DeLucia will never have to purchase a meal in Oxford, Mississippi ever again. The Rebels ace helped his team reach the College World Series final on Friday and it came after some surprising motivation.

DeLucia, who transferred to Ole Miss prior to this season after two seasons on the JUCO level, is 21 years old, almost 22. And yet, somehow, over the course of his first 21 years on earth, he had never seen a giraffe. HE HAD NEVER SEEN A GIRAFFE IN HIS LIFE.

There is a very good chance that if you polled 100 people, upwards of 90 of those people could say they have seen a giraffe. That number might even be low.

Well, that changed for DeLucia this week.

Ole Miss stayed atop the winner’s bracket at the College World Series and earned a day off on Tuesday. The Rebels took that time to stop by the Omaha zoo.

Family trip to the zoo! pic.twitter.com/yMIi6kigSX

While at the zoo, DeLucia got to see his first-ever giraffe. At 21 years old.

After experiencing his first giraffe, DeLucia got the ball in an elimination game on Thursday.

“Dylan DeLucia spent his day off at the zoo,” ESPN’s broadcast said on Thursday. “He got to feed the giraffes, he got all excited, he’d never seen a giraffe.”

Two days after hanging out with the giraffe, DeLucia threw a complete-game shutout to send Ole Miss to the College World Series final. He threw 114 pitches, did not allow a walk, surrendered only four hits and struck out seven. It was electric.

SHUTOUT. TO THE FINALS Y'ALL! pic.twitter.com/wnt2e1LYTR

Is there magic powers in the giraffes at the Omaha zoo? Some are saying.