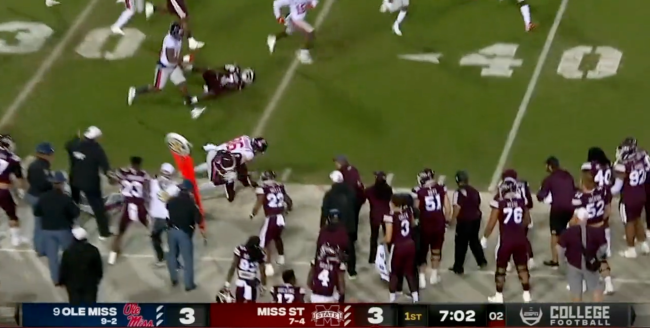 Ole Miss punter, and noted bad boy, Mac Brown wanted all of the smoke against Mississippi State. Brown, who is a sixth-year senior due to redshirt and COVID-19 blanket waiver, was out for blood during Thanksgiving night’s Egg Bowl.

It was an interesting week for the Minnesota-native. The Rebels’ starting kicker was suspended for the rivalry bout (and potentially longer) after reportedly testing positive for a performance enhancing drug.

The kicker handled Ole Miss kickoffs and field goals all season. Thus, Brown was thrust into action as not only the punter, but also as the kickoff guy.

It ended up paying dividends.

Midway through the first quarter, Brown lined up to send one deep. He left his kickoff just short of the end zone and the return man, Lideatrick Griffin, decided to take it out.

After a momentary fumble, the returner took off down the near side and went 35 yards before being met by the wrath of Brown. As the two lined up for a collision course on the sideline, Brown absolutely obliterated Griffin and sent him into the shadow realm.

Immediately after laying the wood, Brown hopped right up and immediately talked his talk to an assistant coach on the opposing sideline.

But Brown was NOT done there.

Three quarters later, after Ole Miss scored to go ahead by 18, Brown was again on kickoff duty. Although he didn’t make the tackle himself, he came flying in as the play came to a close to catch a body real quick.

After giving the business to backup wide receiver Austin Williams, he gave a quick shoulder to Dylan Lawrence on his way to the sideline.

And then, with the game all-but over, Brown booted it away once again. Griffin was again on the receiving end of the return and took it out to about the 35, where he slipped a tackle and got loose.

Moments later, he was clipped and fell to the turf. As he was falling to the ground, he was met by Brown’s wrath once more.

@macbrown854 is out here snapping necks and cashing checks 💰💰💰 pic.twitter.com/FjKVQ9Jv4I

Brown, who will graduate after the upcoming New Year’s Six Bowl, deserves an NFL contract. He is a tremendous talent in terms of his actual punting skills and he is quite the asset as a tackler— and, perhaps more importantly, a locker room guy.

Griffin is going to be having nightmare of Bad Boy Brown for the next 365 days.