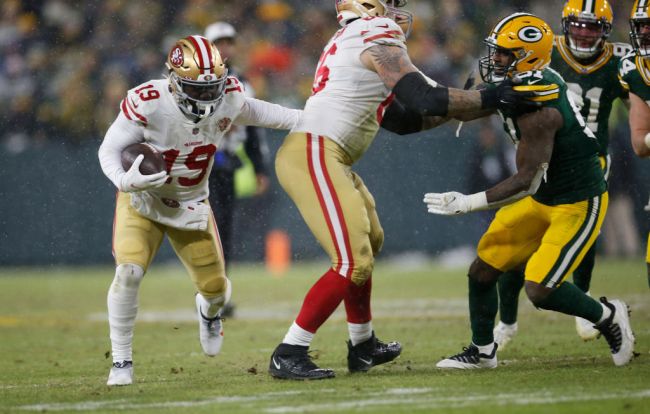 In spite of Deebo Samuel’s public request to be traded by the San Francisco 49ers, the team has stated that they are not interested in trading him.

However, it was reported earlier today that they do have an asking price in mind for the receiver. That price was 2 1st round picks and while it is steep, it may not be enough to deter teams from coming after Deebo after his career-best 2021 season.

There also now appears to be a team who is willing to make an offer that might not quite meet the 49ers’ expected demands, but would nonetheless be an interesting offer.

According to Pro Football Network’s Tony Pauline, the New York Jets are willing to offer the 10th pick in this year’s draft in exchange for Deebo Samuel.

Earlier today, it was reported that the 49ers were looking for 2 1st rounders for Deebo Samuel, but it would be interesting to see if that demand would change if the Jets offered pick 10. The Tyreek Hill and Davante Adams trades each only included 1 1st rounder and they were both in the 20s.

Acquiring pick 10 would be an intriguing possibility for the 49ers. They could use it to immediately replace Deebo. If they wait on a receiver, they could instead fill a need at cornerback with Derek Stinlgey Jr. They might be able to land Kyle Hamilton with the pick to address their need at safety.

They could even trade back and address either of those positions or pick up a center in case Alex Mack doesn’t return.

Even with the NFL Draft just 3 days away, Deebo Samuel’s pursuit of a trade remains one of the most interesting stories in the league.