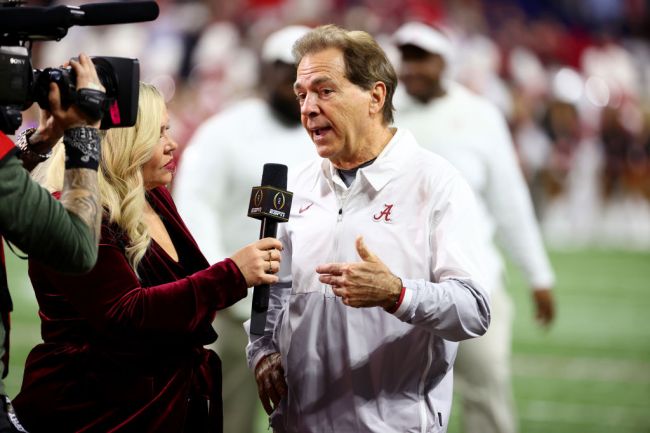 College football fans are still months away from getting to watch their favorite teams in action, but that hasn’t meant that there’s no drama for fans to enjoy.

Last night, while speaking to boosters, Alabama head coach Nick Saban decided to discuss the spending habits of Texas A&M. As we learned earlier this year in Jimbo Fisher’s rant about BroBible and Sliced Bread, this isn’t a topic Fisher is too thrilled to hear people discussing publicly.

Today, he called a press conference to respond to Saban’s allegations about what A&M is paying to recruit players and had plenty to say about the Crimson Tide coach.

The drama already has many looking forward to the October 8th meeting between these two programs, including Ole Miss head coach Lane Kiffin.

Now it seems that sportsbooks are ready to capitalize on the building hype for this matchup as they have revealed the opening lines for that October 8th game.

Lines for Texas A&M at Alabama on Oct. 8

Waiting for odds on whether there will be a postgame handshake between Jimbo and Saban pic.twitter.com/aczmPbLRwZ

The line itself shouldn’t come as much of a surprise to those with experience betting on Alabama football games. It’s rare for them to be anything less than a double-digit favorite at home unless they are playing an elite opponent.

It seems oddsmakers don’t put A&M in that class despite their top rated recruiting class. ESPN’s FPI currently had them as the 14th best team in the country when the rankings first came out, which is not enough to earn them a little bit more respect against the top team in the rankings.

This likely wasn’t a matchup many people were thinking about before last night, but Alabama-A&M has quickly become a game that college football fans are excited about and one that will probably bring in plenty of action for sports books.