NCAA Did Oregon State Basketball Dirty By Kicking Them Out Of Hotel At 1:15 In The Morning After Elite Eight Loss 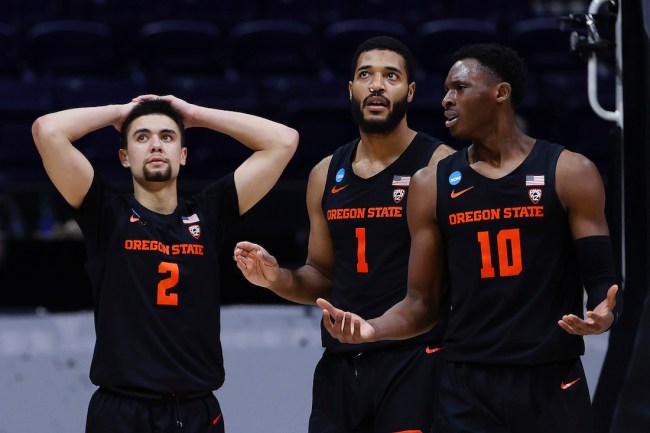 Monday was a rough night for the Oregon State basketball team. Not only did the Beavers’ miraculous run as a Cinderella in this year’s NCAA Tournament come to an end — with the 12-seed losing to the 2-seeded Houston Cougars — but, immediately following the heartbreaking loss, the NCAA wasn’t giving the team much sympathy.

That’s because, per Nick Daschel of The Oregonian, the Oregon State basketball squad was basically booted from its hotel upon arrival from the arena, and told to pack up as quickly as possible in order to make a flight at 1:15 a.m. Ultimately, the Beavers arrived on campus around 4 a.m. Tuesday morning.

The NCAA had a nice parting gift for Oregon State. As soon as they got back to the hotel, they were told to pack up and get on a 1:15 am flight back to Eugene. Everyone had to hurriedly pack and head to the airport. Team arrives in Corvallis at 4 am Tuesday.

This is the real March madness! How on earth did the NCAA let this happen? Sure, I get that we’re living in a pandemic and all that — so the organization presumably wanted the Oregon State basketball team to get out of Indianapolis as quickly as possible in order to eliminate any potential risk of spreading COVID — but this is absurd. Like, give these student-athletes a night to recover from the difficult loss to Houston and put them on a flight Tuesday morning. People need to process this kind of stuff.

And for all those people who argue that this travel itinerary is just standard protocol in the NCAA Tournament, think again. According to one person on Twitter, the other losing team from Monday’s Elite Eight, the Arkansas Razorbacks, departed Indianapolis Tuesday morning at 10 a.m. — so it sure seems as if Oregon State got a raw deal.

Arkansas got a 10am departure this morning. 🧐

Look, the NCAA doesn’t necessarily owe the Oregon State basketball team anything. But most people probably agree that they sort of did the Beavers dirty by booting them from their hotel in Indianapolis immediately following the loss to Houston, telling them to pack up and then board a 1:15 a.m. flight that arrives home at 4 a.m. If March Madness is supposed to be a dream come true that gives players their one shining moment, Oregon State never had the chance to sleep to really experience that. And with the NCAA’s history of treating student-athletes poorly, this is just the latest example that the entire organization has to be better.