Oregon State Didn’t Reach The Final Four, But The Beavers’ Backdoor Cover Was An All-Time Bad Beat For Vegas 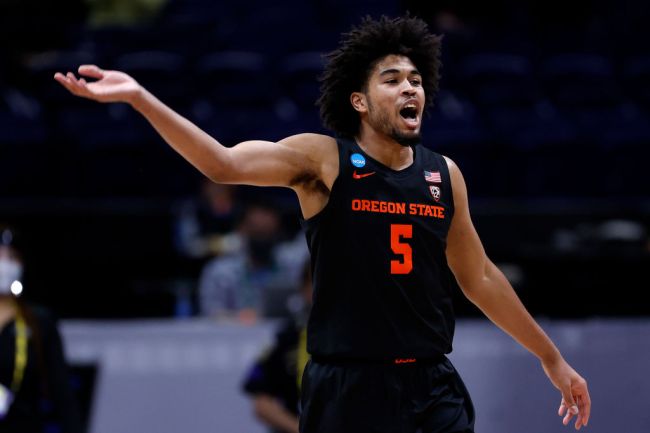 Oregon State’s cinderella run came to a close on Monday night with a loss to Houston in the Elite Eight. Wayne Tinkle’s team fell behind 34-17 at halftime and just couldn’t fight all the way back against the 2-seed Cougars, but it made things very interesting in the second half and hit a three-pointer in the final moments to prove its greatness.

The Beavers, who were given eight points as the underdogs, went on a 10-0 run to begin the second half and cut a 14-point lead down to just four.

Battling back-and-forth for a moment, the Pac-12 Tournament champions tied things up at 55 with three minutes and 48 seconds remaining.

TRADING BUCKETS 🔥@BeaverMBB–@UHCougarMBK coming down to the wire. #MarchMadness pic.twitter.com/wjek4zlirm

The lead never swung in favor of the 12-seed, but the team from Corvallis kept it close enough to intentionally foul down the stretch and hope for a lucky break. That break never came.

While the underdogs couldn’t continue their miraculous run and become the first 12-seed to reach the Final Four, they knocked down a triple in the closing moments that cemented their legacy. Oregon State’s last shot of the game cut the lead to six— giving them the backdoor cover with 3.5 seconds left.

An estimated 65% of bettors across the country had the Beavers covering, so naturally people were fired up. Tough beat for Baylor bettors, tougher beat for the house. You love to see it.

Oregon State +8 on the last three of the game only to not foul Houston might be the greatest backdoor Scotty Van bad beat covers in the history of my March Madness gambling career!! What a W #MarchMadness #BadBeats pic.twitter.com/vzE6JCXFWk

The final inbounds play was successful in keeping the clock running and the game ended with a final score of 67-61. Houston earned its first Final Four birth in 37 years, but its opponents won a few people some money with a late make.

The Houston Cougars are heading to the Final Four for the first time since 1984.
pic.twitter.com/eO6IRlxHby

7th year head coach Kelvin Sampson and his squad will face the winner between Arkansas and Baylor for a chance to play in the National Championship. While it is well deserved, we will not be soon to forget the feat of Oregon State. Good teams win, great teams cover and Tinkle’s team is great.