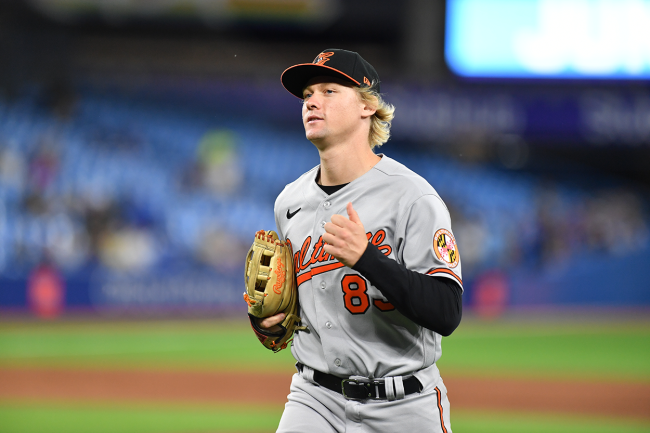 There are very few things greater than watching a mom and dad react to their son’s first-career hit in the MLB. It is a total happy tear-jerker every single time.

Well, Kyle Stowers got to share that moment with his family on Monday. The 24-year-old outfielder was drafted by Baltimore in the second round of the 2019 MLB Draft out of Stanford and received his first big league at-bat in the late innings of a lopsided game.

Things got started on Monday afternoon when Stowers was selected as a COVID-19 replacement and made the Orioles roster for the first time.

Tonight, Stowers will become the third Top-10 prospect in the Orioles organization to debut in the majors this season. pic.twitter.com/JvcJNY7J1R

And then he had his name called in the seventh inning of an 11-1 game.

Although things were out of reach for Baltimore, that didn’t stop Stowers from giving the team a glimpse at the future. First, former No. 1 prospect Adley Rutschman recorded an infield single.

Two batters later, Stowers stepped into the batter’s box. He took the first pitch of his first at-bat for a strike and then turned on an outside fastball.

Fixing his helmet while he ran out of the box, Stowers sprinted around first and slid into second base for his first-career hit in the MLB.

Kyle Stowers doubles in a run for his first MLB hit! pic.twitter.com/w557Lgahiu

The 106.3mph line drive was also Stowers’ first-career RBI. Meanwhile, his family was in the stands and soaked it all in.

His mom and fiancée cheered, while his father-in-law teared up in what became an incredible, emotional moment.

This is what it’s all about 🧡 pic.twitter.com/IXELcmh3bz

Some things are bigger than sports and this was one of those things. Monday will be a day that the Stowers family never forgets.