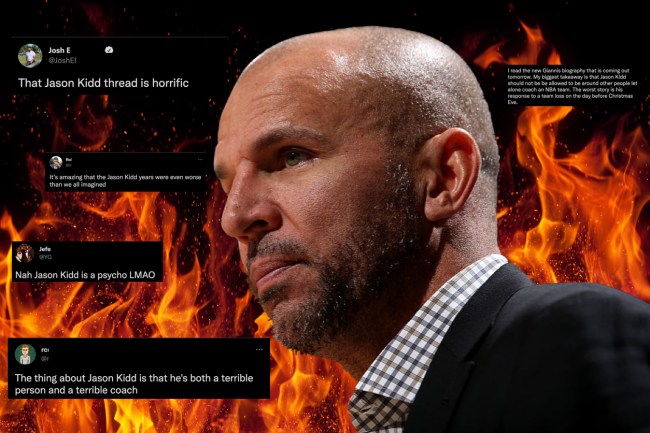 Us: “Jason Kidd is the Zodiac Killer.”

Personal Disclaimer: I have no vested interest in the public image of Jason Kidd. I don’t know the man, but my Asshole Meter ticks into the red whenever his name is mentioned, and given his prior transgressions, I’d say the meter is properly-calibrated. I only have a vested interest in justice with the information at hand.

I am after no glory or internet points, which appear to be the most valuable currency these days.

That Jason Kidd thread is horrific

You can decide whether the Hall of Famer should or should not “be around other people, let alone coach an NBA team,” given the tales revealed in Giannis’ book that went viral via Twitter user @FakeTJHawke.

How The Grinch Stole Christmas

I read the new Giannis biography that is coming out tomorrow. My biggest takeaway is that Jason Kidd should not be be allowed to be around other people let alone coach an NBA team. The worst story is his response to a team loss on the day before Christmas Eve. pic.twitter.com/SYdwfX3t9t

Kidd, who scheduled to give players the next two days off, scheduled a rabid practice the following morning, running the team into the ground and calling Larry Sanders a “piece of sh*t” and a “terrible player.”

TLDR: Kidd then sentenced the team to a dip in the pool, continuing to berate Larry Sanders to the point of “full-body convulsion.”

Sanders, who’s suffered from depression and anxiety, asked to be excused from practice and took himself to the hospital, spending the night there.

Can We Speak With Your Load Manager?

One of the less dangerous but nonetheless unhinged parts (to me at least) was the time Kidd called out Giannis in front of the team for a mistake, was proven wrong, and then sat Giannis anyway. pic.twitter.com/cdl75i0DN2

Kidd “benched” Giannis even after being proven wrong about a missed assignment. The Bucks were blowing out the 76ers, yet this is supposed to be a condemnation of character? Kawhi Leonard would send Kidd and Edible Arrangements for this.

After Kidd was fired in 2018, Giannis heaped praise on Kidd, claiming he was a “big part” of his success and development in the NBA.

Some more comments from former colleagues and players on and off the record about Jason Kidd. pic.twitter.com/ukf19whpQM

TLDR: Thon Maker was late to practice, so he made the team run. Like literally any coach at any level in America.

“Kidd would embarrass the culprit of an error by making everyone but that person run sprints for his mistake.”

This is literally 30% of the job description of a head coach. Should we cancel him or give him a raise?

If any of these anecdotes make you feel less about Jason Kidd, you haven’t been paying attention.