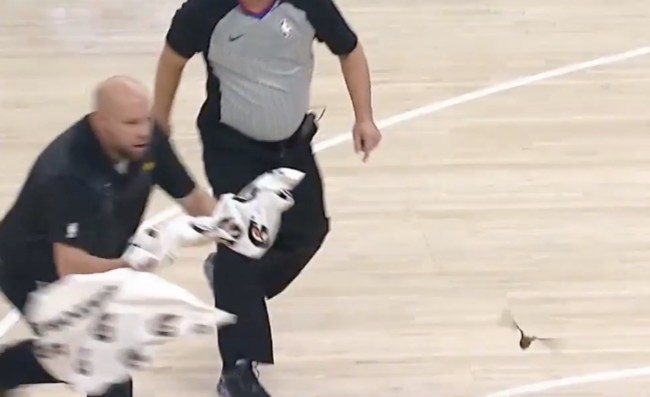 Bats have been omnipresent in the NBA lately. TWICE last week, NBA games in San Antonio were disrupted when a bat flew down and disrupted the game.

Isolated incident, right? Wrong. Last night, the Pacers-Clippers game was stopped TWICE when a bat dive-bombed the court. The game was disrupted in the first and third quarters. In the first quarter, the bat showed up and flew around for a whopping four minutes before retreating to the safety of the nosebleed seats.

The bat then showed up again in the 3rd quarter. And since this was an NBA game there were plenty of cameras on hand to capture some wild video and images of the incident. I just have to wonder, is nobody here worried about rabies??? I’m a simple man, I see a bat and I assume it has rabies. If I see that bat dropping in to take the tip-off in an NBA game I’m blowing the whistle and hauling ass out of there.

Indiana #Pacers ball boy Jason Morris swats a towel at a bat that halted the Pacers game against the #Clippers in the first half of their game at Bankers Life Fieldhouse on Thursday, Feb. 7, 2019. @IndyStarSports @Pacers pic.twitter.com/RaUpUQzbJp

Are they trying to….kick the bat?

As Samurai Myles i have failed Indy on the conquest to apprehend the 🦇…. we’ll take a W instead!😂 pic.twitter.com/nVOqXb1lGp

The thing about many bats, and bat bites, is they have really small teeth. We tend to think of all bats as the enormous vampire bats you see in vampire movies but they’re generally pretty small creatures with tiny teeth and you might not feel the bat from a bat which could transmit any number of diseases. I, for one, think the NBA isn’t doing enough to combat this tidal wave of bats that’s threatening the sanctity of the game.