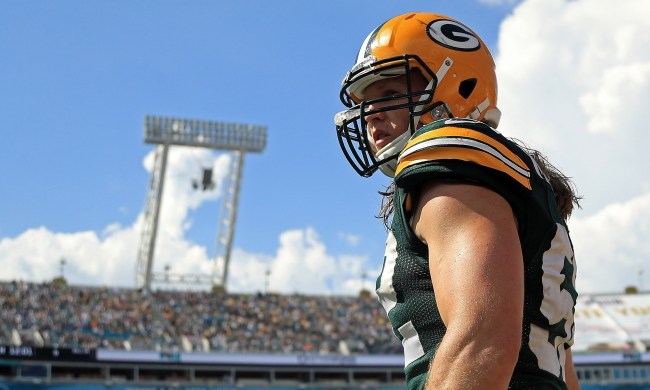 Remember way back yesterday when we reported that Odell Beckham, Jr. was “going dark” on social media and the visceral reactions of many New York Giants fans to the news?

This coming after reports that Beckham was a “cancer” in the locker room and would be a bad fit for the Cleveland Browns – something Baker Mayfield disputed.

Yeah, well, Tuesday night another player long associated with one franchise, linebacker Clay Matthews revealed that after 10 years as a Packer he was leaving Green Bay and heading to Los Angeles after signing a new two-year deal with the Rams.

Two-year deal for LB Clay Matthews with the #Rams worth a max of $16.75 million, source says. He had more lucrative offers on the table but he just welcomed his third child and really wanted to play close to home. Plus, a shot at another ring doesn’t hurt.

Matthews was the second beloved Packer to announce he was leaving the team this week as wide receiver Randall Cobb signed a contract to play for the Dallas Cowboys in 2019.

So, you can imagine how pissed off Packers fans might feel when Matthews dropped this image on his Twitter account. You know, like how angry GIants fans are with their team’s management about Beckham leaving.

What’s that? Packers fans were very supportive and classy about one of their football legends leaving to play for another team? You don’t say?

Thank you for everything with the Packers. You were the first Packers jersey I ever got. You were always a class act on and off the field. Green Bay will miss you dearly! #ThankYouClay

Thanks for everything Clay 🥺✊🏻 pic.twitter.com/2E4OPezbKh

Congrats on the new opportunity, and thank you for some amazing years in Green Bay. You will be missed! #GoPackGo

Thanks for your time in Green Bay. It was awesome watching you play for the green and gold. Good luck with the @RamsNFL.

9 years ago I saw my first ever NFL game at Lambeau Field and watched Clay go off against the Bills. Watching him play hooked me on football and I went on to play through HS and college; became a Packers fan all because of him. Best wishes 52 👏🏼

This is how I’ll always remember @ClayMatthews52 — On behalf of all @packers fans THANK YOU for giving you everything you had every week & for helping bring the Lombardi home in 2011. pic.twitter.com/WMSbjIUfn7

Thank you for everything! You are and always be my favorite defensive Packer! This is a sad day for me, but I wish you the best of sucess moving forward!

#52 was my very first Packer jersey.
I wish you the very best, Clay. Thanks for being a Packer all these years. 👊#GoPackGo #Respect pic.twitter.com/Y3oLm2vFAj

Wonder if the response would have been the same if he had signed with the Bears? (Of course, no Packers legend would ever do something so petty as that.)