Baker Mayfield Defends Odell Beckham Jr. Against Any Haters Thinking The WR Might Be A Bad Fit With Browns 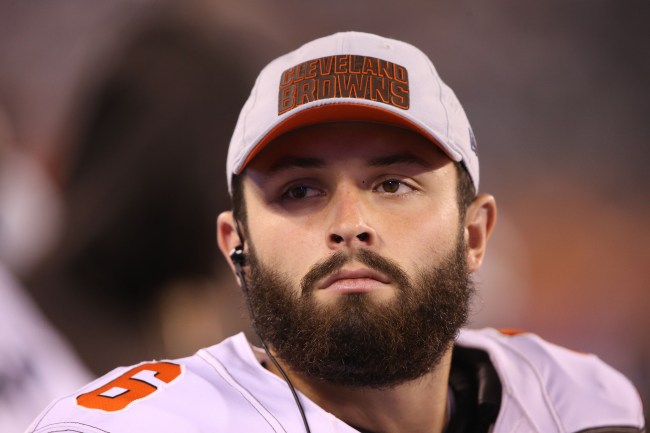 Baker Mayfield has lots of new weapons after the Cleveland Browns went out and traded for All-Pro wide receiver Odell Beckham Jr. this week, which comes after upgrading their backfield with the addition of Pro Bowl runner Kareem Hunt in February. So, to say the second-year quarterback is a little excited about the 2019 NFL season is probably a huge understatement.

While the season is still months away, Mayfield is already in peak midseason form when it comes to dealing with the media’s questions, because, while visiting his good buddy on the Milwaukee Brewers, 2018 NL Most Valuable Player Christian Yelich, Baker was asked about some of the reports that OBJ might not be the best fit in the Browns’ locker room. In other words, with a guy who has shown to wear his heart on his sleeve, will that type of personality disrupt the entire team?

Baker Mayfield didn’t even bat on eye at the question, shutting down any haters who might think Beckham Jr. has his own itinerary in mind, and not the goal of his team or teammates. Here’s what Baker had to tell AdamMcCalvy, the Brewers’ beat writer for MLB.com.

To paraphrase Baker Mayfield, it sure sounds as if he’s got his newest weapon’s back, happily defending him from those in the media already. Like a crafty veteran, the quarterback even threw himself into the conversation, comparing his fiery attitude to Odell Beckham Jr.’s and fellow Browns wideout Jarvis Landry.

“You could say the same thing about me. You don’t want to tame it, you just let them be themselves and make plays. That’s who they are, when it comes down to it. The guys in that locker room, you’re going to love playing with them. And I know from Saquon [Barkley] and Sterling Shepard that I’m very close with, I know exactly who OBJ is inside the locker room and who he is to his teammates. That’s the most important thing. People can have their attitudes and perspective on it, but he’s himself and he has his teammates’ back.”

That’s pretty awesome of the young signal-caller, who clearly knows that the entire Browns franchise is all in on making a Super Bowl run next season.

As for Odell Beckham Jr.’s thoughts about being a locker room cancer? Well, he had some fun with things on Twitter by responding in jest; take a look.

Pretty clever by OBJ, so good to see he’s having some fun with all the hate coming his way.

Who knows how this Browns team will mesh next season, but general manager John Dorsey has upgraded the roster in huge ways since he took over the team at the end of 2017. Now’s the time to bring it all together, create relationships over the summer and go out there ready to live up to expectations next season. Regardless of how it goes, it’ll be fun AF to watch.