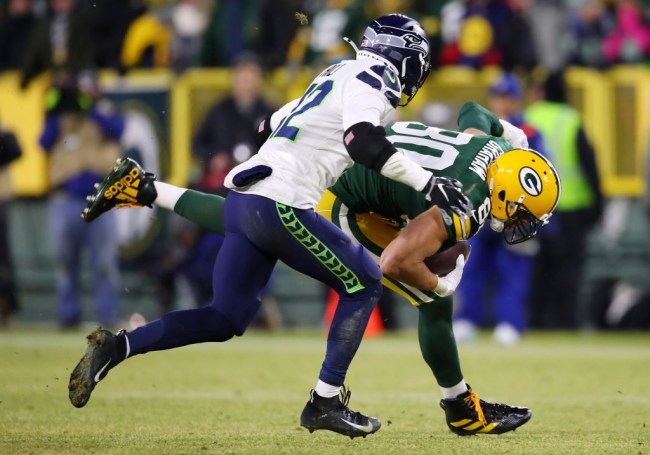 The Green Bay Packers found themselves in possession of the ball with a little over two minutes to go in the final game of this year’s slate of divisional-round games after Pete Carroll decided to put this faith in his defense when he opted to punt instead of attempting a lengthy fourth-down conversion.

Unfortunately, that decision backfired just a bit when the defense in question failed to prevent Davante Adams from hauling in a 32-yard pass from Aaron Rodgers to set up a showdown at midfield with the Seahawks in need of a stop to keep their season alive.

Seattle managed to hold its ground for the first couple of plays to force a third-and-nine where everything was on the line only to see Jimmy Graham haul in a catch and barrel his way toward the first-down marker before getting tackled by Lano Hill.

Jimmy Graham : 3 catches for 49 yards on 4 targets (Picked up 9 yards on 3rd & 9 with this catch to essentially end the game. Green Bay was 9-14 on 3rd down) pic.twitter.com/TEmyAfilIv

When I first watched the play live, I was almost positive Hill had managed to make the stop before Graham crossed the threshold. However, the refs gave him what appeared to be a very generous spot and took a second look at the bang-bang play before standing by their decision.

This understandably caused Packers fans to rejoice and Seahawks supporters to cry “Conspiracy!” as the refs found themselves painted as scapegoats yet again.

Was Jimmy Graham short of the first down? pic.twitter.com/CYfh7Yx9Dc

I think he was short. pic.twitter.com/2bYD12wcnb

However, while the people who are tasked with maintaining that line might pride themselves on their accuracy, it’s still an unofficial estimate—and after taking a closer look at the official one, it looks like the officiating crew made the right call.

Just stop. The yellow line is and always has been unofficial. And in this case, the yellow line wasn’t even close. pic.twitter.com/3Vc9Nw4SBn

With that said, something tells me this angle will also be debated to death.