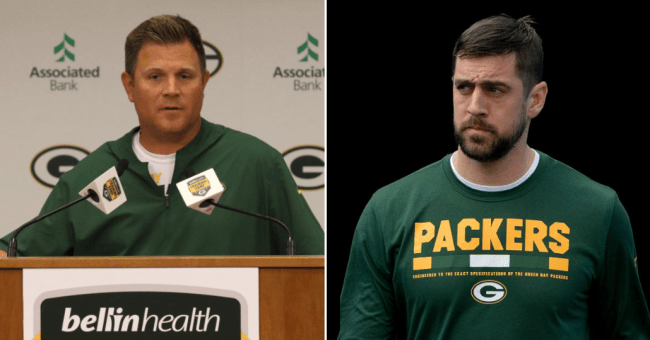 During a press conference on Wednesday, Rodgers blasted the team for disrespecting “high character” veteran players on their way out.

Aaron Rodgers says he was angry some “high character”outgoing veterans were disrespected by low ball offers or no offers at all pic.twitter.com/Cf8t0rF7g9

“I wanted to help the organization maybe learn from the mistakes in the past in my opinion about the way that some of the outgoing veterans were treated and just the fact that we didn’t retain a number of players that I felt like were core players to our foundation, to our locker room, high character guys, I’m talking about Charles Woodson, Jordy Nelson, Julius Peppers, Clay Matthews, Randall Cobb, James Jones, Jon Kuhn, TJ Lang, Bryan Bulaga, Casey Heyward, Micah Hyde…Guys who were exceptional players for us but great locker room guys, high character guys, many of them who weren’t offered a contract at all, or were extremely low-balled, or maybe, in my opinion, not given the respect on the way out that guys of their status and stature high character deserved’

Rodgers also complained about the fact that the team didn’t listen to his input on potential free agent signings.

Aaron Rodgers says he tried to give his input involving free agents but was ignored by the front office pic.twitter.com/KCD1UQMuDl

“The other part was wanting to be a part of conversations involving free agents, which has never happened in my career…I’ve tried to pass along information. Hasn’t really been used.”

Gutekunst held his own press conference on Thursday morning and responded to Rodgers’ complaints.

As to not re-signing “high character” veteran players, Gutekunst says the NFL is hard business and the Packers made the best decisions for the team.

“It’s a hard business and sometimes the Packers may take the brunt of the NFL business. While those decisions are hard, they have to be made for the team to grow, keeping players longer than we should then all of a sudden we’re not signing guys that we should down the road”

Gutekunst went on to say that he does listen to Rodgers’ input on free agents but ultimately he has final say on who the Packers sign.

Packers GM Brian Gutekunst on Aaron Rodgers having input on personnel decisions: "He's always had it, it's how we incorporate it."

“He’s always had it, it’s how we incorporate it and at the end of the day it’s really no different than some of the other people in our organization that have opinions about what we’re gonna do but I’m going to take that in and I’ll make that decision and we’ll move forward.”