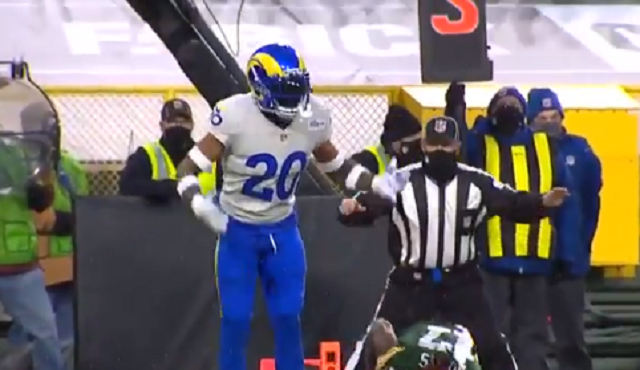 Saturday’s Packers-Rams divisional playoff game featured the juggernaut matchup between wide receiver Davante Adams and cornerback Jalen Ramsey, who are both considered the top players in their positions.

Before the game, both players had to be separated after some heated trash talk during pregame warmups.

Jalen Ramsey just ran out of the tunnel and looked right at one Packers player going through stretching nearby and seemed to friendly bark something. That player was Davante Adams.

Davante Adams had to be walked back to the Packers' side of the field after chirping with Jalen Ramsey.

During the game, Adams was able to score on Ramsey after some creative playcalling from the Packers.

Davante was MOVING on this play 🔥🥴 @tae15adams @packers

Ramsey was unhappy with the defensive coverage on the play and threw a fit after the TD.

Jalen Ramsey was not happy after that TD to Davante Adams. pic.twitter.com/wI1zVzptOH

Jalen Ramsey was so mad. I love it.

Jalen Ramsey mad cause he got caught off guard lol pic.twitter.com/87qL3IWlO7

Threw a tantrum like a 4 year old lmao https://t.co/Pvav7xsp4N

He looks like my four year old students when someone take a toy away 😶 https://t.co/w1GopwjKsA