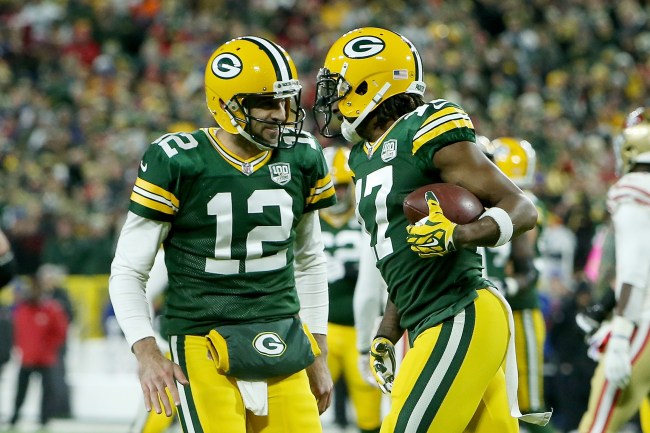 Aaron Rodgers is in the trenches taking grenades after a bombshell Bleacher Report article titled ‘What Happened In Green Bay‘ painted the Packers quarterback in an awful light. The report claimed that Rodgers was essentially a prima donna with no interest in being a leadership figure and who harbored long-standing resentment for former coach Mike McCarthy dating back to 2005 when McCarthy chose to draft Alex Smith ahead of him when he worked for the Niners.

Rodgers appeared on ESPN Milwaukee on Monday to defend his honor, chalking the story up to a “smear attack” from a writer looking to advance his career by picking off quotes from  “irrelevant, bitter players who all have an agenda.”

Davante Adams, Rodgers favorite receiving target and teammate of four years, supported his quarterback by ripping the Bleacher Report’s Tyler Dunne for speaking on things he’s not qualified to speak on.

Adams blasted Dunne’s claim from an anonymous source that Rodgers insisted rookie wide receiver Equanimeous St. Brown run a different route from what Mike McCarthy called during a game last season. St. Brown reportedly told McCarthy he was “improvising” so as to not throw Rodgers to the wolves. Adams said this was nothing more than a miscommunication against different coverage.

100% accurate. Thats what kills me man. Drag a HOF QB’s name thru the mud behind something you have zero clue about. New rule: Dont speak on shit unless u know all the facts. To whom it may concern…. https://t.co/vxk2lb5Mjo

Former Packer James Jones, who won a Super Bowl with Rodgers in 2010, also came to defense of his former teammate, saying the report made him “sick” and the man blasted in the article “isn’t the man I know.”

"When I read this article it makes me sick…"

Jeff Janis, former Packers wide receiver played with the team from 2014-2017, piled on the support train and vehemently denied the claim that he ended up in the quarterback’s “doghouse” after complaining about his role in the offense.

We’re good for one or two of these bombshell smear campaigns every offseason. Last season, it was Tom Brady’s trainer Alex Guerrero tearing the team apart. Reminder: the Patriots won the Super Bowl last season and the writer of that report probably got a promotion. And around and around we go.