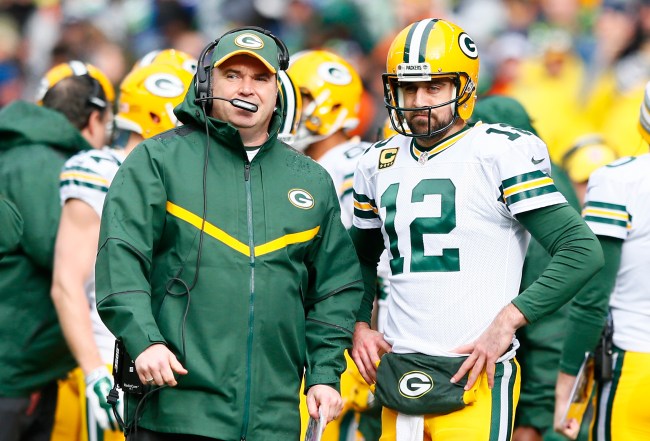 Aaron Rodgers and his former Green Bay Packers head coach Mike McCarthy had some great times together, but, lately, everyone’s only talking about the bad. Sure, the pair won a Super Bowl title in 2010, but the talk in the past couple weeks has only been about their differences, with the future Hall of Fame quarterback largely getting blamed for McCarty being fired during the 2018 NFL season, with former teammates claiming he’s nothing more than a prima donna who basically did his own thing and tuned out his head coach.

The original report came from Bleacher Report writer Tyler Dunne, who went to great lengths in order to talk with former teammates and people around the Green Bay Packers organization to get details on what may have really happened while Aaron Rodgers was playing under Mike McCarthy. It has led to lots of finger pointing and interesting stories — like how McCarthy used to skip meetings for massages — while also leading to some of Rodgers’ former teammates to lend their opinions, like Ha Ha Clinton-Dix recently did.

While everyone seems to have weighed in on the topic, today was the first time that Aaron Rodgers himself finally talked about Dunne’s article — and he didn’t mince words when offering up his opinion. Talking to Jason Wilde and Mark Tauscher of ESPN Milwaukee, here’s what Rodgers had to say about the original B/R piece, per Pro Football Talk.

“This was a smear attack by a writer looking to advanced his career talking with mostly irrelevant, bitter players who all have an agenda whether they’re advancing their own careers or just trying to stir old stuff up.”

“The two main things I think I really want to talk about and just clear up, which are really central themes to the article, the first is the [Packers CEO] Mark Murphy conversation because part of the article seems to want to say the Packers are worried about me as the leader of the football team moving forward,” Rodgers said. “And before I get into what actually happened in the conversation with Mark, I want to say two things: One, if they knew that, why would they offer me a contract last year? And two, which goes into my second central thesis point that I’m going to take down, is if I really disliked Mike [McCarthy] so much, why would I re-sign knowing that if I play and we do what we do around here — we made the playoffs eight straight years and then I got hurt and we missed the playoffs — it’s going to be me and Mike my entire career. So if I really disliked him that much, do you think I’d re-sign. Is the money that important to me? I’ll tell you it’s not. Quality of life is important.”

“I think we need to honor Mike and respect him the right way,” Rodgers said, via Demovsky. “We had a hell of a run. We had 13 years, four NFC championships, one Super Bowl, eight straight playoffs, 19 straight wins. . . . So, instead of trashing this guy on the way out, let’s remember the amazing times that we had together. Packer fans, remember this, especially those of you who live in Green Bay: Mike lives here. Mike has young kids here. So Mike has to be here. Think about how difficult it is for him. My favor that I would ask of you, strongly, is if you see Mike, shake his hand. Tell him thanks for the memories. Tell him thanks for the coaching job that he did. Tell him how much you appreciate him being a part of what we built here. Things change from ‘06 to ‘18. We came off of a bad season in ‘05 and we built something special and had sustained success, so instead of trashing this guy on the way out — last year was tough, no doubt about it — but let’s honor him and his legacy as the second-winningest coach in Packers history. If you see him, please, just show him the respect that he deserves. Not only does he have to live in Green Bay, he wants to. He loves it here. He’s going to be here. So, if you see him, do him that favor and show him the respect that he deserves.”

“I wish I hadn’t said anything after the Bills game last year,” Rodger said, via Demovsky. “I wish I had just gotten with him in person. I wasn’t trying to be disrespectful to him but I know how it came off. That’s what I told him when I met with him face to face.”

This is an interesting reaction from Aaron Rodgers because, well, not only is it very much unlike him, but it’s almost completely different than most of the original Bleacher Report article from Dunne. Rodgers even added that he “loves Mike McCarthy. Mike has been a huge part of my success in my career,” via NFL Network’s Tim Pelissero’s Twitter account.

Rodgers now talking about his former coach: "I love Mike McCarthy. Mike has been a huge part of my success in my career." Acknowledges they have had issues, as any long issue does, but always dealt face to face.

Asked if he has any regrets about his relationship with McCarthy, Rodgers says: "I wish I hadn’t said anything after the Bills game last year." Said he wasn't trying to be disrespectful, but knows how it came across. "The beauty in our relationship is it grew year after year."

Rodgers after @jasonjwilde specifically mentions Greg Jennings and Jermichael Finley: "If it’s not an article about me, do you ever hear their names anywhere else? … You talk about me being sensitive and petty, at what point do you move on or stop telling the same stories?"

For Aaron Rodgers to handle the questions on the radio appearance today and go into such great detail might mean that he’s just trying to bury the hatchet and move on. Whether none, some or most of Tyler Dunne’s report is true, the Rodgers-McCarthy relationship is in the past, so, with a new head coach now, it seems important to try and move on. Who knows what that means once he’s back with the team, but, for now, he’s addressed the article, slammed it, brushed off any former teammates trying to stir old things up and, hopefully, put this all in the rearview mirror.