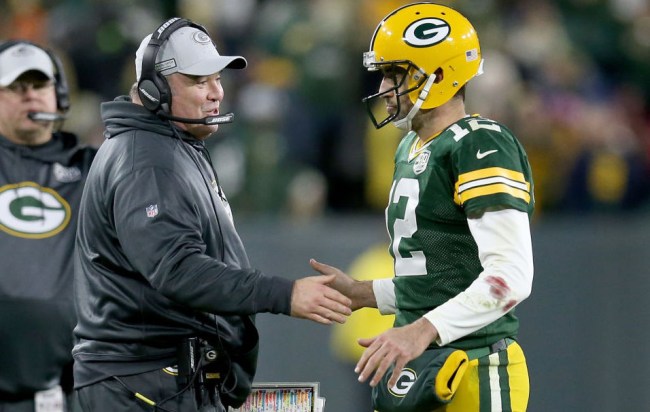 The Green Bay Packers ended the season with a 6-9-1 record, which is objectively nice but probably not what the team had in mind heading into the year.

Aaron Rodgers has a long history of rocky relationships and he found himself embroiled in some more drama as the season progressed by continually butting heads with (now former) head coach Mike McCarthy.

The Packers gave Rodgers a nice birthday present in the form of McCarthy’s firing in December, and while the quarterback attempted to do some damage control, he caught a fair amount of heat thanks to the way he handled the situation.

Packers quarterback Aaron Rodgers touches on his relationship with Mike McCarthy one day after the team fires McCarthy as head coach. pic.twitter.com/9dVCQw3vtd

Over the past month, we’ve been treated to a trickle of juicy drama concerning the falling out, with one former Packers assistant claiming Rodgers has really been the coach of the team during his time in Green Bay.

Now, we might have some more evidence to back that claim up.

Packers tight end Marcedes Lewis recently sat down with Mostly Football to shed some light on how things unfolded and revealed Rodgers was straight up ignoring McCarthy’s play calling at one point.

Mike McCarthy: *signals a play in*

Aaron Rodgers: Very cool but no thanks. @MarcedesLewis89 offers a glimpse into the final days of Mike McCarthy as head coach of the #Packers pic.twitter.com/wUHVU5uIFk

“McCarthy called in a play and Aaron kind of was like, ‘Nah.’ He was like, ‘Davante [Adams] give me this. Marcedes, come off the ball, you give me this.’ He gave direction and protection to the line. And it was four-minute offense, he threw a 40-yard bomb for a completion. I’m like, what’s really going on? I’d never seen nothing like that before in my life.”

Maybe it’s time for the player-coach to make a comeback.