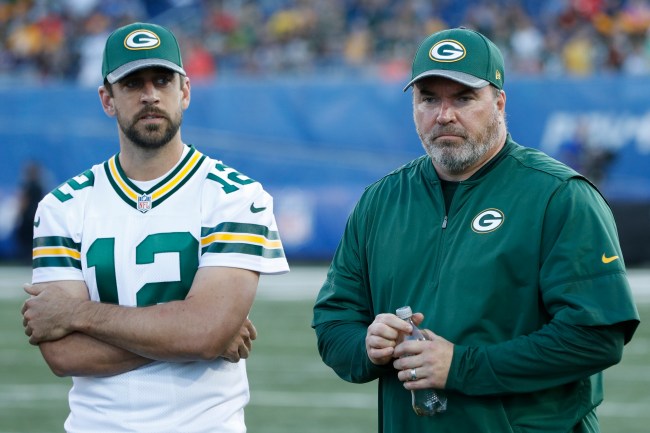 It was really no secret to anyone who paid attention to football for the past few years that Aaron Rodgers and former Packers head coach never got along.

Today Bleacher Report’s Tyler Dunne detailed the fractured relationship between Rodgers and McCarthy that spanned over a decade.

According to Dunne the rift between the two began because Rodgers resented the fact that McCarthy chose to draft Alex Smith ahead of him when he worked for the Niners the year before taking the Packers head coaching job.

The worst-kept secret at 1265 Lombardi Avenue was that Rodgers seemed to loathe his coach from the moment McCarthy was hired.

Nobody holds a grudge in any sport like Rodgers. When it comes to Rodgers, grudges do not merrily float away. They stick. They grow. They refuel.

No, Rodgers would not forget that McCarthy had helped perpetuate his four-and-a-half-hour wait in the NFL draft green room the year prior. His nationally televised embarrassment. McCarthy, then the 49ers offensive coordinator, chose Alex Smith No. 1 overall. Not Rodgers.

No, Rodgers would not take it as a funny accident.

“Aaron’s always had a chip on his shoulder with Mike,” says Ryan Grant, the Packers’ starting running back from 2007 to 2012. “The guy who ended up becoming your coach passed on you when he had a chance. Aaron was upset that Mike passed on him—that Mike actually verbally said that Alex Smith was a better quarterback.”

Rodgers would continue to look down at McCarthy throughout the years because he always believed that he was smarter than his coach.

one person who was then close to Rodgers remembers he would regularly call to vent that McCarthy didn’t have a clue what he was doing. He’d tell him that McCarthy frequently called the wrong play. That he used the wrong personnel. That they were running plays that worked one out of 50 times in practice. That McCarthy was a buffoon he was constantly bailing out.

“Mike has a low football IQ, and that used to always bother Aaron,” this source says. “He’d say Mike has one of the lowest IQs, if not the lowest IQ, of any coach he’s ever had.”

Adds a personnel man who worked for the Packers at the time: “He’s not going to respect you if he thinks he’s smarter than you.”

The report also includes a ridiculous tidbit on how McCarthy would skip team meetings to get massages in his office.

About once a week, a meeting would start up and McCarthy was MIA. Players weren’t quite sure where he was while, for example, an assistant coach would run the team’s final prep on the Saturday before a game. Eventually, word leaked that McCarthy, the one calling plays on game day, was up in his office getting a massage during those meetings.

One player had the same massage therapist, and she let it slip that McCarthy would sneak her up a back stairway to his office while the rest of the team prepared for that week’s opponent.

“That was when guys were like, ‘What the heck?'” says one longtime Packer. “Everybody was like, ‘Really? Wow.'”

Rodgers in particular was not thrilled.

Eventually Rodgers got his wish and McCarthy was fired on the QB’s 35th birthday last December.

Now seems like a good time to wish a happy 35th birthday to Aaron Rodgers! https://t.co/psdMmdWX6D
via @ESPN App https://t.co/dGuzug0v0i

Now that McCarthy is gone Rodgers has no one to blame if things go south next season.