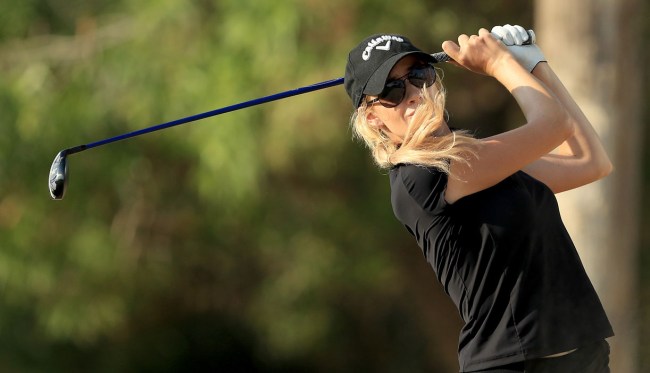 As anyone who follows golfer and social media influencer Paige Spiranac knows, she is 100 percent in on the joke that a lot of guys only follow her, watch her videos, and look at her photos because she’s an attractive woman.

Spiranac regularly wears provocative outfits and makes sure has the proper amount of “jiggle,” as she has put it.

That being said, Spiranac, who was named the Sexiest Woman Alive by Maxim magazine earlier this year, also gets her fair share of negative comments, often about her body.

And she’s not happy about it.

“Honestly, the amount of men calling me ‘fat’ on this post is next level lol,” the 29-year-old wrote on her Instagram story about the comments on the video below. “I’ve had to delete so many comments which I almost never do.”

“I know my body is a big part of my brand and that comes with a territory, but it’s hard to maintain my ideal weight all the time for year after year,” Spiranac continued. “I have to work very hard in the gym and with diet. It doesn’t come naturally to me. It can be defeating when people call out my body insecurities.

“Would love to start sharing more of my fitness plan and what I eat with you all because I’m sure a lot of you feel a similar body pressure. I used to work out to look good, but now I’m trying to work out to feel food. Changing my mentality around working out to make it a more positive experience.

Spiranac, who appeared in the 2018 Sports Illustrated Swimsuit Issue, added, “I know I have a male dominated audience and wanted to open up the floor to hear about your experiences with body insecurities. I don’t think it’s talked about enough how men are also body shamed. We all feel the pressure to look a certain way.”

Many of Paige Spiranac’s 3.6 million Instagram followers were very upset about all the fat shaming

“There ain’t nothing fat about her,” one male fan commented on Twitter.

Who do we need to fight @PaigeSpiranac

“Men? Fat shaming…HER? They’re probably just jealous she doesn’t give them attention and that was their way to get it. By bullying her. I hope she blocked them. Or made it so nobody can comment,” a female fan tweeted.

How miserable with your life do you have to be to fat shame one of the most attractive women in the public spotlight today?https://t.co/ZHsCGofIYY

Spiranac shared in a recent video that she isn’t looking for a fairy tale relationship. She wants “a man to love her the way he loves his fantasy football team.”

She said a fantasy football man probably won’t have any commitment issues because they have been playing in the same league “for years and years.”

Paige did joke, however, that playing in multiple leagues has her a little concerned about a fantasy football man’s monogamy.