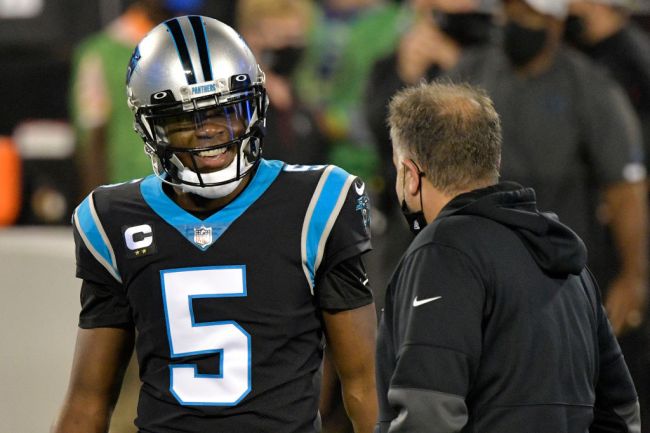 The writing has been on the wall regarding Teddy Bridgewater and his future in Carolina for quite some time now. In January, Panthers head coach Matt Rhule made it abundantly clear that the franchise was in the market for another quarterback. The Panthers went out and got that quarterback by trading for Sam Darnold all but signaling that Bridgewater’s time in Carolina is almost up.

Darnold hasn’t been tapped as the Panthers’ starting QB just yet, but shipping away a few draft picks for a QB that the franchise clearly sees potential with paints a pretty clear picture. Now the question is, what are the Panthers going to do with Bridgewater?

According to Ian Rapaport, the Panthers are going to allow Bridgewater the opportunity to speak with teams around the league about a potential trade. The franchise is also open to seeing Bridgewater return next season.

Following the trade for Sam Darnold, the #Panthers spoke with QB Teddy Bridgewater and allowed him the opportunity to talk with teams to potentially facilitate a trade, sources say. Carolina is open to Bridgewater returning, but will give him a chance to have a say in his future.

It’s not too often you see teams openly show support of a player like the Panthers are in this situation. Sure, they probably wouldn’t hate seeing Bridgewater’s contract get traded off the books, but there are also worse options to have as a backup if he does return. It’s a classy move from Carolina to be so honest about the situation.

Bridgewater is set to carry a cap-hit of over $21 million over each of the next two seasons on his current contract. No team in the NFL wants to pay that sort of money for a backup quarterback. While the Panthers are practicing a good gesture in this scenario, they’ll likely have to play bad guy if Bridgewater can’t find a new team via trade, as Carolina would likely look to release him.