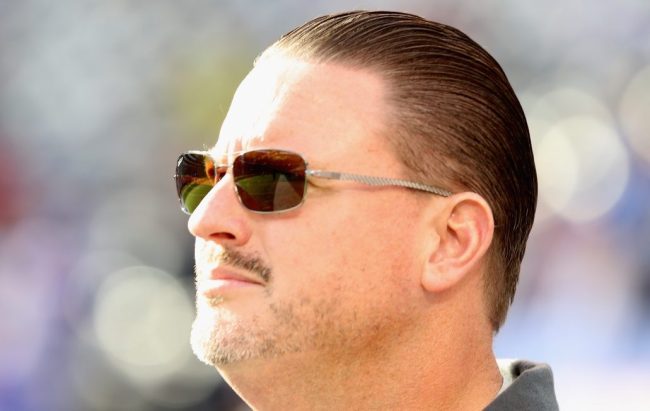 The Carolina Panthers quarterback competition has been the talk of the town since the front office traded for Baker Mayfield. There is a chance Sam Darnold retains the starting role, but we won’t know who will be leading the way under center until the coaching staff makes an official announcement. Even so, offensive coordinator Ben McAdoo weighs in on the camp battle in the weirdest way possible.

According to Joe Person, the Panthers’ offensive coordinator was asked whether competition in the quarterback room could make it awkward. Rather than just saying “yes,” or “no,” McAdoo decided to say something about leaving a crystal ball in a different pair of pants.

Ben McAdoo on whether competition could make the Panthers’ QB room awkward: “I left my crystal ball in my other pants.”
👖

Is this a common expression we’ve never heard of before? Are pants the proper way to store crystal balls? Isn’t there already competition in the Panthers quarterback room? All we know is we have plenty of questions for Ben McAdoo as his answer is completely out of left field.

Either way, Carolina is in the middle of trying to find the right quarterback to lead the way. There seems to be a common belief within the league that the Panthers are a quarterback away from becoming a threat. The coaching staff is a completely different story. However, if the franchise can get the most out of Baker Mayfield or Sam Darnold then they should improve off of last season.

Look for the Panthers to name their starting quarterback in the coming weeks. Matt Rhule should be making his final decision soon to help the team prepare for the regular season more efficiently. If only Ben McAdoo didn’t leave his crystal ball in his other pants then we might have the answer by now.