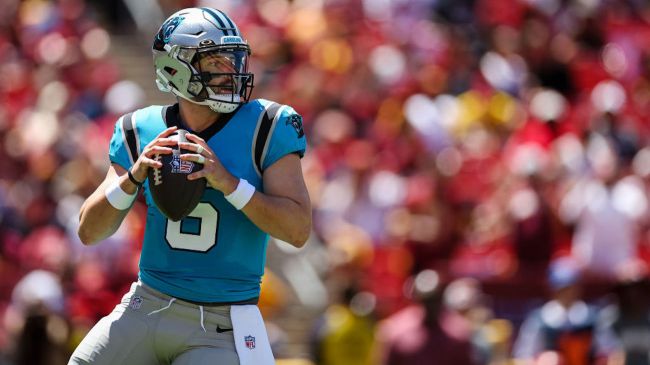 Earlier this year — before Baker Mayfield had been officially traded from the Cleveland Browns to the Carolina Panthers — wideout Robbie Anderson publicly expressed his disinterest in the team acquiring the former Oklahoma Sooner by commenting “Noooo” on an Instagram post suggesting Mayfield could wind up in Carolina.

Fast forward about six weeks and not only have the Panthers swapped a 2024 conditional draft pick for Mayfield’s services but head coach Matt Rhule has since named the 27-year-old the team’s starting quarterback for the season, as he beat out fellow 2018 draft pick Sam Darnold for the job.

And lo and behold, now that Mayfield is officially the team’s starter and now responsible for the livelihoods of the Panthers’ wide receivers, the pass-catching core now suddenly has nothing but nice things to say about Baker.

“Baker’s a great leader,” Terrace Marshall Jr. told reporters. “He’s a great quarterback. I feel like the team’s attracted to him well. And ready to get started.”

“To be honest, like, I didn’t really watch him like that when he wasn’t my teammate,” Shi Smith said. “But I knew he had it in him, as far as coming out of college and stuff. I remember the stuff he did. I knew he had that dog mentality in him. Now, I know he wanna win.”

And while former Baker “hater” Robbie Anderson didn’t make any comments to the media about the QB this week, he was full of praise for Mayfield earlier this month, telling the press that there’s “a lot” he likes about Baker, such as his “energy, leadership, and confidence.”

Perhaps poetically, Baker and the Panthers will kick off their 2022 season on Sunday, September 11 against Mayfield’s former employers, the highly-controversial Cleveland Browns. The Browns, however, will be without Deshaun Watson, who will be serving the first of his 11-game suspension.

RELATED: Sam Darnold Reacts To Being Traded To Carolina Just To Lose His Job To A Fellow 1st Round Bust