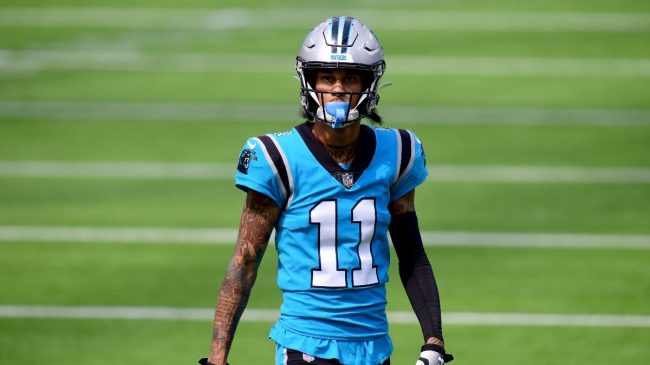 It’s been an absolutely brutal day for Robbie Anderson. First, he was seen arguing with a coach on the sideline. Then he wasn’t sitting with his teammates during discussing the game plan. Now, interim head coach Steve Wilks has kicked him off the field after the Carolina Panthers receiver had an Antonio Brown-like meltdown amid trade rumors.

According to NFL on ESPN, Wilks sent Robbie Anderson to the locker room mid-game. They appeared to have shared some heated words with one another as the veteran receiver left the field. With the Panthers going through the struggle right now, this is just a cherry on top of everything else that has transpired.

Robbie Anderson appears to have been sent to the locker room by Panthers interim head coach Steve Wilks. pic.twitter.com/hKQxefIr1B

The Panthers are in shambles right now. With Matt Rhule gone, the franchise is hoping to get back on track. However, that’s hard to do when a veteran wide receiver is openly feuding with the coaching staff. This is also terrible timing, as Carolina has admitted they’re open to trading Robbie Anderson.

With Anderson having an Antonio Brown-like outburst, it may deter other teams from inquiring about the veteran receiver. After a full day of odd behavior, Steve Wilks finally had enough of it. We’ll see how this all plays out. The Panthers are hoping to trade Robbie Anderson, but after this wild incident, that might be difficult to achieve.

Considering the trade deadline is looming, the Panthers are likely to search for offers in the coming weeks. Based on what we’ve seen from Anderson on Sunday, it’s probably safe to say his time in Carolina is nearing an end.