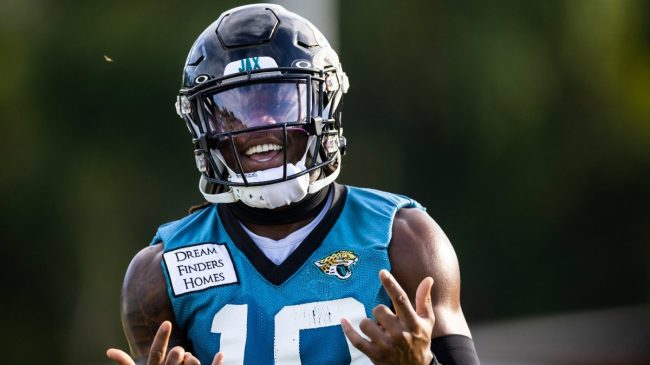 The Carolina Panthers hope to make some noise in the 2022 season. They’ve been extremely busy this offseason after reeling in plenty of new talent to boost the roster. Recently, the front office made a big trade with the Jacksonville Jaguars and brought in Laviska Shenault. Now, his latest comments are likely to have Panthers fans absolutely hyped.

According to Kevin Patra, Sheanult is extremely excited about his new opportunity in Carolina. He has a real chance to increase the Panthers’ offense as the wide receiver is a versatile athlete. His excitement is going to rub off on fans, as he clearly can’t wait for the upcoming season to kick off. He claims:

“I’m a hungry player. I’m a dog. I’ll get down and dirty. I’m a tough person. I love this game, love to score touchdowns, love to get the fans lit; that’s one of the biggest things.”

After making the trade, the Panthers suddenly have a plethora of weapons around Baker Mayfield. DJ Moore is going to lead the way as the leading receiver, however, Laviska Shenault has the potential to become the second-best pass option on this team. Additionally, his versatility makes him unique, as Shenault is a threat with the ball in his hands. We could see some run plays specifically designed for the former Jaguars receiver in Carolina.

We’ll see how it plays out though. Laviska Shenault wasn’t able to get fully going in Jacksonville. Even so, a fresh new start with the Panthers could unlock his potential. If that’s the case, then Carolina could be much more dangerous than previously perceived.