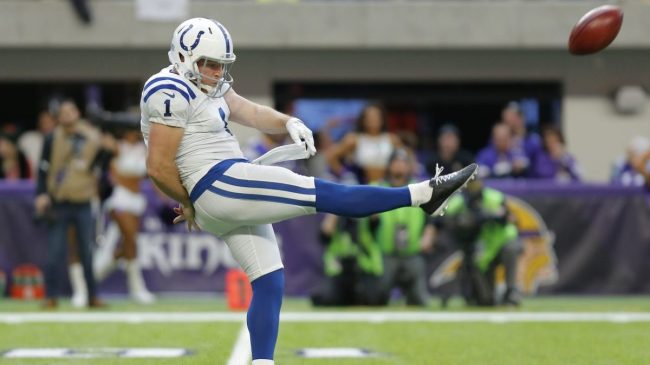 Pat McAfee is a man of many, many talents. In fact, it’s hard for sports fans to flip on a television these days and not see McAfee’s face somewhere or another. Not only does he host the Pat McAfee shows every weekday, but McAfee also serves as a color commentator on WWE Friday Night Smackdown and most recently took on the role of full-time host for ESPN’s College GameDay.

But above all else, McAfee is an athlete.

The big-legged punter made a name for himself at West Virginia University where he was first-team All-American in 2008. The Indianapolis Colts then selected McAfee in the seventh round of the 2009 NFL Draft.

The Plum (Pa.) native went on to have a successful eight-year NFL career in Indianapolis. He made the Pro Bowl in 2014 and 2016 and was named first-team All-Pro in the former.

Now McAfee is being recognized for his success on the field, and he couldn’t quite believe it.

McAfee was hosting his daily radio show when he stopped everyone in their tracks to announce some breaking news. Regular listeners will know that this is nothing new for McAfee. But this time was different. This time, the news was about him.

McAfee announced that he received a text from a friend letting him know that he was one of 129 modern-era players nominated for the Pro Football Hall of Fame in 2023.

McAfee was one of just 12 special teams players on the list, and he couldn’t believe the news.

He immediately deflected, stating that he didn’t play well enough to be on the list. McAfee then stated that even if his co-hosts could vote, he’d rather they vote former Raiders punter Shane Lechler.

While McAfee is very, very long shot to make the hall, Lechler could well become the second punter ever voted in after Ray Guy (2014). Lechler made seven Pro Bowls and nine All-Pro teams. He led the league in punting yards four times and was voted to both the 2000s and 2010s NFL All-Decade teams.

Though McAfee may not make it, it’s clear how much of an honor it was for him to be nominated and he continues to leave his mark on the sports world.