Pat McAfee Had An All-Time, Hilarious Broadcaster Jinx Before A UCLA Blocked Punt 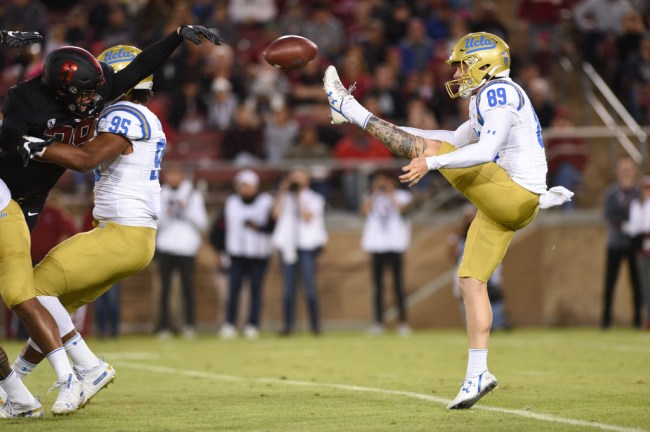 Announcer jinx is a very real thing. We see it happen every single year in every single sport. Whether it be an announcer talking about how a golfer never misses a three-footer that’s then followed by a miss, a kicker missing a field goal, basketball players at the free-throw line etc.; it’s a legitimate thing.

It’s not too often we get a blocked punt announcer jinx, but we got one on Thursday night during the UCLA – Stanford game.

Pat McAfee, the former Pro Bowl punter for the Colts now turned media monster, was calling the game on ESPN. Towards the end of the first quarter, with the Bruins set to punt, he literally said the words “Chip Kelly has a very well-coached special teams” and as soon as the word ‘teams’ came out of his mouth the punt was blocked and taken to the endzone.

This is an all-time announcer jinx and very well may not be beaten this year or in years to come. You look up ‘announcer jinx’ on any platform and this needs to be the definition until the end of days.

McAfee has a massive following on social media and a well-known slogan ‘For The Brand’ to represent all of the punters out there, but this isn’t the best look for said brand.

Nevertheless, it was an electric call and McAfee handled the announcer jinx he put on poor Wade Lees extremely well.