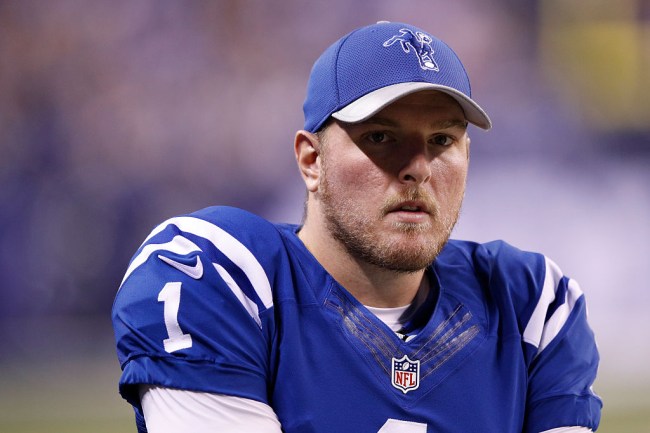 Future employers of Pat McAfee should be aware by now that if you want to keep the 31-year-old former Colts punter on staff, do not make him feel disrespected. McAfee joined Barstool Sports to create content after retiring from the NFL in February 2017 but recently quit after feeling slighted on some business decisions, saying, “I began being disrespected by the business people in the building. I’ve decided I don’t want to make money for those folks anymore.”

McAfee was coming off his second Pro Bowl appearance when he hung up the cleats and left $6 million on the table to start a podcast, and his reason for retirement sounds a lot like his reason for leaving Barstool. On his podcast Monday morning, McAfee recalled an interaction he had with then Colts GM Ryan Grigson after a blowout loss to the Steelers on Thanksgiving that was essentially the nail in the coffin.

Grigson called him into his office:

“Maybe this is an olive branch,” McAfee said he thought at the time. “If it wasn’t for me, we’re shut out on national TV. I’m leading the league in almost everything, I don’t think I’ve given up a return yard in maybe two months, three months, I’m the No. 2 jersey seller for the Colts, I’m doing a lot of charity work — there’s a lot. Maybe this is Grigson being, ‘You know, I fined you three to four times before about dumb [expletive], but I would like to be friends’…

McAfee says Grigson was irate about a photo he had taken of himself in the team facility.

“So I sit down. He has that picture on a piece of paper. Slams it on the desk, pushes it across the desk to me … He pulls out my contract, opens it up, goes to a clause. He goes ‘Since this isn’t your first offense, I can fine you a game check for this.’ … You only get 17 game checks in your entire salary, so if you want to look up what that was, it was $100,000 almost. He said ‘I can fine you a game check for this.’ I said, ‘For what?’ He said, ‘Look, is that a football room?’ I said, ‘It’s an equipment room. Footballs are in there, I guess.’ He goes, ‘Why do you have to be such a smart [expletive]? … I can fine you anything I want. This is why we’re losing, by the way. This is why we lost to the Steelers,’ he tells me.”

“I said, ‘You paid a guy [Luck] $140 million and you can’t keep him healthy. Your offensive line’s swiss cheese. He’s blown out his shoulder three times, and you’re worried about this [expletive]?’ He goes, ‘What did you just say to me?’ I go, ‘Oh yeah, I’m best in the game at what I do. I wish you would do the same.’ This is a moment he did not expect. He goes, ‘You’re going to walk into my office and disrespect me?’ I go, ‘Well, you called me into here.’ He said, ‘I’m going to fine you a whole game check.’ I said, ‘Cool bro,’ and literally walked out of his office. As I’m walking out of the office, he gives me the, ‘Get out of my office.’ I go, ‘Already walking out.’”

“I told Chuck on that phone call, I said ‘I just don’t feel like you guys appreciate or are grateful for what I’m doing for you … Anything at work, I busted my [expletive] off because I wanted to talk. As a punter, you have to be good to talk. You can’t just suck and talk. So I told Chuck, that was the conversation … I told him, ‘I don’t think the NFL is for me anymore, and to be honest, I don’t think I want to make money for you guys anymore. And I am done. I am done after this season.’”

McAfee ended up getting the last laugh after the Colts fired Grigson:

Listen to the entire podcast here..