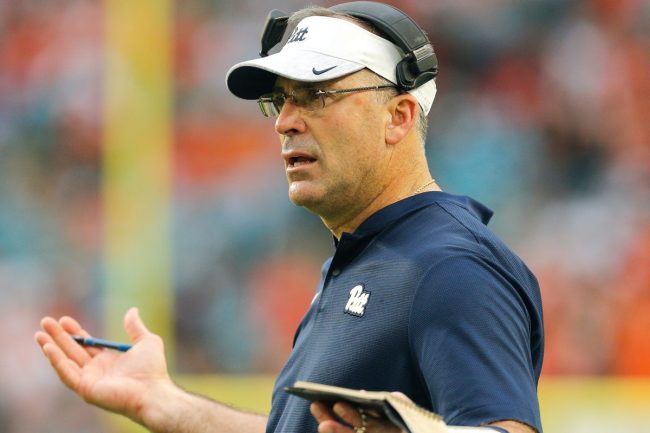 Pitt Panthers coach Pat Narduzzi is being mocked on social media after his latest comments about the Big Ten. In particular, he spoke about Michigan State, who his team lost to in the postseason last year.

Narduzzi has never been one to bite his tongue. He’s had run ins with Dabo Swinney in the ACC, had opposing coaches snub his postgame handshakes, and called out the NCAA in respect to NIL.

Hell, he even went after his former offensive coordinator in a recent rant. This coming after the OC helped Pitt develop a first-round pick at QB, have a WR take home the Belitnikoff trophy, and win the ACC for the first time.

If those comments weren’t enough, he was also heard bashing the Big Ten and Michigan State.

Pitt played the Spartans in last year’s Peach Bowl. Michigan State took the Panthers down, 31-21. Pittsburgh was playing with a backup quarterback after Kenny Pickett opted to sit out for the NFL Draft.

The Panthers played well, taking a 21-10 lead into the fourth quarter before crumbling. Unfortunately, those inconsistencies under center led to their demise. Pitt didn’t score on offense in the second half, they managed only 274 total yards, and QB Payton Thorne threw a game-sealing pick six on the final drive.

This is what Narduzzi had to say about the bowl loss in that recent interview.

“[Kenny Pickett] is a 21-point difference. Michigan State gets their butt kicked in [if he plays].

“We talk about Big Ten and SEC and ACC. If that was one of the best Big Ten teams last year, then let’s go to the Big Ten and win it every year. So, I don’t want to hear about this Big Ten dominance and SEC dominance.”

While Pickett likely would’ve made a difference, Narduzzi saying that the Panthers would win the Big Ten easily is just comical. This is a team that lost to Western Michigan and had one top 25 win. A far cry from being able to dominate the likes of Ohio State, Penn State, and Michigan.

Fans were quick to respond to the coach’s comments.

Pitt coach mocked for comments about the Big Ten

Fans also note that the Spartans were without their best player, Kenneth Walker, too.

Narduzzi is 1-6 in his last seven games against the Big Ten. And did we mention they lost to Western Michigan last year?

Pat you got beat by Western Michigan. https://t.co/kBANax4llv

Just an awful take by the Pitt head coach.