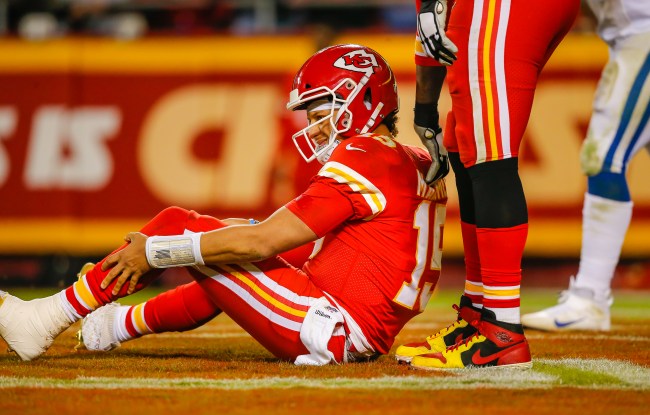 A Kansas church has an interesting way to help heal Patrick Mahomes.

After badly rolling his ankle in week 1, the Kansas City QB has reaggravated the injury in the last two games and according to NFL Network’s James Palmer it’s much worse than most people think

Patrick Mahomes has been a different quarterback in each of the three games he's injured his ankle. Teams are seeing it and adjusting. @gmfb #nflnetwork pic.twitter.com/t13sFh9ER8

“It is a legit injury,” . “I’ve been told that by multiple people. Andy Reid has talked about how it is bothering Patrick Mahomes and multiple people who know about the injury told me it’s probably worse than most people think it is. Speaking with the Broncos, they’re well aware of it, but at the same time, they said, ‘We can’t think about it at all. With as talented as Patrick Mahomes is, he could probably beat you on one leg and we know the injury is not going to knock him out of the game.’”

Asbury United Methodist Church in Prairie Village is taking matters into their own hands and are holding a prayer service for Mahomes’ ankle in hoping that God can do his thing and heal the Chiefs superstar QB.

After his injured ankle tarnished some of the Mahomes Magic, a metro church is asking for a little help, a little divine intervention, you could say.​ https://t.co/Mx6DOQgaEH

”
Fans realized how serious the injury could be after the Colts sacked Mahomes in Week 5. The injured ankle tarnished some of the Mahomes Magic as reality caught up to the star quarterback and his fans.

Now a metro church is asking for a little help, a little divine intervention, you could say.

“With the last two games, we kind of thought that they may need some type of help,” said Dave Burton, facilities director at Asbury United Methodist church in Prairie Village. “We knew that his ankle was injured so we decided to possibly have a healing service to help him heal that ankle quicker.”

The Chiefs play tonight against the Broncos. Hopefully he doesn’t get reinjured before the prayer service on Sunday.