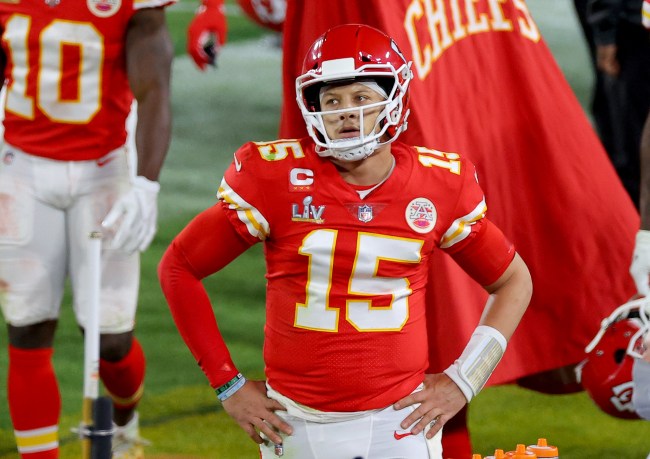 The irony in life is that the goal is often to reach a big levels of success so others can find small reasons to hate you.

It’s the old build ’em up to knock ’em down methodology. Remember when Ellen DeGeneres was just the philanthropic dancing talk show host instead of the ruthless dictator worth destroying? All it took was a long-standing emotional terrorism campaign of a few measly interns WHAT OF IT.

Patrick Mahomes is still very much in the Build ‘Em Up stage of fame, we are still rightfully marveling at his abilities *insert horizontal throw GIF here*. But once the people get a sense that he is over-staying his welcome atop the mountain, something as trivial as a hat in his locker can be fodder for damning Deadspin editorials for the next decade.

“Why Tom Brady Being A Good Father Is Problematic”

While Mahomes is still in that Universal Admiration sweet spot, he should do everything he can to not expedite his demise.

Criticizing wide receivers for not being in their right spots is one thing, but taking aim at your linemen—who may have the most thankless position in all of professional sports—is too far for my sensitive self.

Mahomes blamed some of his teammates and also took some responsibility but as a QB you can't just take "some" accountability for a loss, they always take all of it.

“I just think we weren’t on the same page as an offense,” Mahomes said. “I wasn’t getting the ball out on time. The receivers were running routes not exactly where I thought they were going to be at. The offensive line, they were good sometimes and sometimes they let guys through. When you play a good defense like that, you’ve got to be on the same page as an offense, and we weren’t today and that’s why we played so bad.”

Or face the wrath of People You’ll Never Meet.

Your franchise QB blaming his teammates after a loss?? Couldn’t be me. https://t.co/f9tAolRKEL

Smh this the kinda teammate he is huh ? https://t.co/lKlO4uKZ0g

Could you imagine if these words came out of Josh Allen’s mouth? https://t.co/6kmLQB8yR9

It's not about if he's right or wrong about them. Franchise QBs always take full accountability for a loss and not blame others.pic.twitter.com/mw82YJfdMe

This dude gets a pass for everything. Dude has been garbage in both super bowls he played in.

Take all of the blame or none of it.