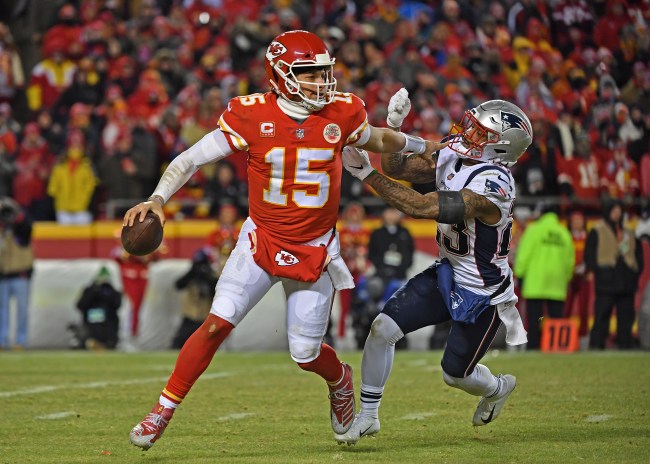 Patrick Mahomes is coming off a season in which he threw for over 5,000 yards, 50 touchdowns and guided his Kansas City Chiefs to the No. 1 seed in the AFC. More impressive? This came during his first season as a starter in the league, showing that the guy has some serious natural talent and, potentially, could get even better as his career goes on.

As impressive as Mahomes’ 2018 season was, though, if he would have listened to the advice of his dad — former MLB pitcher Pat Mahomes Sr. — it would have never even happened, because the elder Mahomes wanted his son to quite football and pursue a career in either baseball or basketball. Here’s what Pat Mahomes Sr. said during an interview with TMZ Sports.

“I knew he was going to be a professional athlete from an early age. Baseball definitely I know he could’ve made. Basketball would’ve been the hardest for him because of his size,” Mahomes told TMZ. “Football was probably the one I would’ve said was his worst chance of making it to the pros and that ended up being his best.”

Patrick Mahomes was better at basketball or baseball, in his dad’s eyes? Uh, seriously, the dude is a freak of nature playing sports — which he proved on the hardwood last week in a viral video of him playing hoops, which prompted the Chiefs to pull the plug on that little hobby really fast.

So why’d Pat Mahomes Sr. think his son would be better at one of the other sports and not make it in football? Apparently, per the TMZ Sports interview, it was because Patrick was being recruited by colleges to play defense, and didn’t even start at quarterback in high school until his junior year.

“They were recruiting him as a safety. And, I was telling him, ‘Why don’t we quit this and let’s just concentrate on the other two?’ I said, ‘We’re just wasting time with this football thing.’ Luckily he didn’t listen to me.”

It’s a good thing Patrick Mahomes either confidently or stubbornly didn’t take his dad’s advice and pursue one of those other sports. While the quarterback has shown to have skills in both baseball and basketball, the dude is the next generation of superstars in the NFL, and we would’ve been robbed of that had he left the gridiron for either a glove or the court. So, from every football fan, thanks for sticking to your guns, Patrick.