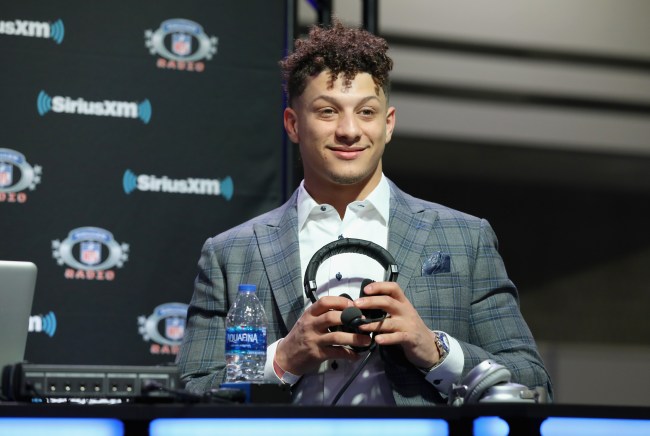 Patrick Mahomes pretty much made the NFL his bitch in 2018. He was named the 2018 NFL Most Valuable Player, Offensive Player of the Year, First Team All-Pro, and he led the league in touchdowns with 50 which is the most since Peyton Manning’s 55 in 2013 and Tom Brady‘s 50 TDs in 2007.

Mahomes only made one appearance in 2017 after the Chiefs decided to sit Alex Smith in Week 17 after their playoff spot was secured. Mahomes won that game and it was just a flash of his brilliance.

It seems like every NFL insider is heralding Patrick Mahomes as the ‘future of the NFL’ given how athletic and talented he is. Aaron Rodgers is 35. Tom Brady is 41. Drew Brees is 40. Ben Roethlisberger is 36. Philip Rivers is 37. This generation of NFL quarterbacks is getting old and 23-year-old Patrick Mahomes could very well be the future if he stays healthy.

Patrick’s dad, Pat Mahomes, was a former MLB pitcher with the Minnesota Twins, Boston Red Sox, Mets, Rangers, Cubs, and Pirates. Patrick grew up playing football, baseball, and basketball. He was even drafted by the Detroit Tigers in the 37th round of the 2014 MLB draft. The dude’s a freakishly pure athlete.

With the NFL season behind him, Patrick was showing off his skills on the basketball court in a clip that’s since gone viral. He’s breaking ankles and splitting defenses but to be honest, he’s kind of a ball hog, isn’t he? Check him out:

Here’s another angle of those skills:

You can also check out that first clip on Instagram if you’d rather watch it there than on Twitter. I know sometimes one of those social media platforms is blocked on work/school filters but the other one isn’t so I try and give you dudes options:

I can definitively say I’ve never looked as athletic at any point in my life as Patrick Mahomes does on the basketball court and that’s not even his primary sport. Life is good if you’re Patrick Mahomes and/or a Kansas City Chiefs fan.