Chiefs Dodged A Serious Bullet With That Barber’s Positive COVID Test, ‘Cause Patrick Mahomes Was In Line For A Trim 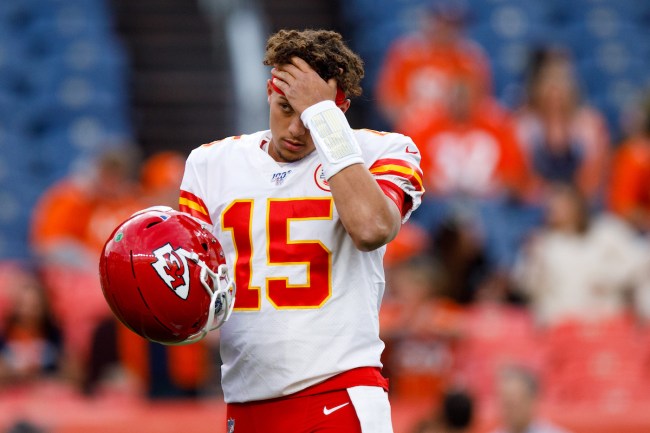 Patrick Mahomes’ hair is often a subject of conversation, with the Chiefs quarterback starring in commercials showing his flow off. Whether it’s touting shampoo or insurance, the reigning Super Bowl MVP knows the lettuce on top of his head is a serious moneymaker. But it also nearly caused a serious problem leading up to Super Bowl 55.

That’s because, per ESPN’s Adam Schefter, via Pro Football Talk, Mahomes was one of 20 Chiefs players and team staffers waiting in line to get a trim prior to this weekend’s Big Game from that barber who, eventually, tested positive for COVID. The barber apparently had numerous negative tests before heading to the team’s facility, but, while waiting for another test’s result, ended up being deemed positive. The team got him out of there just in time, because this could have been a nightmare.

The Chiefs had arranged for the barber to get a COVID-19 test and he was pulled from his duties when the test came back positive. The barber actually found out he was positive while he was in the process of cutting Chiefs center Daniel Kilgore’s hair. He had already cut wide receiver Demarcus Robinson‘s hair, so the two of them have been placed on the COVID-19 reserve list and will isolate until they’ve had negative tests for five days. The barber, Kilgore and Robinson were all wearing masks during the haircuts, and so far Kilgore and Robinson have continued to test negative.

The barber’s positive test did end up impacting the Chiefs earlier this week, with wideout Demarcus Robinson and starting center Daniel Kilgore put on the COVID list after coming in close contact with him. Both of those players are expected to suit up in Super Bowl 55 after meeting the league’s COVID testing protocols. But, man, how lucky did the Chiefs get here?

Could you imagine if Patrick Mahomes had gotten in that barber’s chair? What on earth would the league had done if he, not Robinson or Kilgore, was the Chiefs player in close contact with the COVID-positive barber? Thank goodness we don’t need to know that answer, and the guy was ushered out of the team facility before doing more harm than he did.

While plenty of us are envious of Patrick Mahomes’ hair — but none of us can ever pull it off — here’s to the quarterback having it look a little extra wild for the Super Bowl this weekend. The dude’s wearing a helmet most of the time anyway, so I’m sure nobody will care if it looks like he just rolled out of bed when he’s standing on the sideline; especially since he and the Chiefs got really lucky by not letting the quarterback get close to that barber.