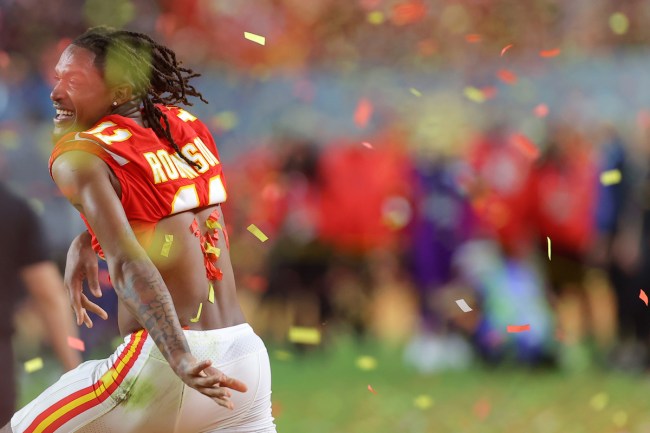 You’ve probably heard about the two Kansas City Chiefs players who were placed on the COVID list just a few days before Super Bowl 55 kicks off, right? Those players — wideout Demarcus Robinson and starting center Daniel Kilgore — are currently quarantining as their teammates prep for the opportunity to win back-to-back championships. And while the status of the two Chiefs players is up in the air at the moment, here’s to hoping they can both be on the field with their team come Sunday.

As the two players, the team and the league wait to see what happens in the next couple days with all of this, there’s a wild backstory as to how Robinson and Kilgore even landed on the COVID list to begin with. It wasn’t because either actually tested positive for the virus, but because they were listed as high-risk contacts after coming in close contact with a barber. Seriously.

But that’s not even the strangest part of all this, because, apparently, the barber didn’t even enter the Kansas City Chiefs’ facility to cut hair until after five straight days of negative tests, so all seemed to be safe. Unfortunately, he was also waiting for results of another test, which ended up coming back positive.

Sources say the barber tested negative five consecutive days before he was allowed to enter the Chiefs’ facility — including a Saturday PCR test that came back negative Sunday.

The barber took an additional rapid test as a precaution before entering the facility Sunday, but the results were delayed briefly because of a line of friends and family also getting tested. He was wearing double PPE and was still cutting Kilgore’s hair — the first in a line of players waiting for haircuts — when the positive result came back. The barber was immediately removed; in a follow-up interview with NFL officials, the barber said he’d also cut Robinson’s hair the previous day away from the facility.

Luckily, both Robinson and Kilgore can still play in Super Bowl 55 should they continue to test negative for COVID over the next few days as Sunday approaches. But talk about a serious scare for them, the Kansas City Chiefs and the league, which has done an incredible job just getting through this unorthodox season — despite lots of hiccups, plenty of maneuvering and more than a few scares.

Following the close call from the barber, another Chiefs player, Tyreek Hill, talked about the immediate response the team made to limit exposure as much as possible. Here’s what the speedy receiver had to tell TMZ:

Hill added, “The Chiefs are bringing in barbers to the facility and getting ’em tested so like they are REALLY following protocol.”

Considering it’s the biggest game of the year, COVID continues to impact the league, and the Chiefs already had a scare with this whole barber situation, it’s obviously the right call for the organization to clamp down as hard as possible to limit players from becoming too lax. Talk about dodging a bullet, though, because this could’ve been so much worse.