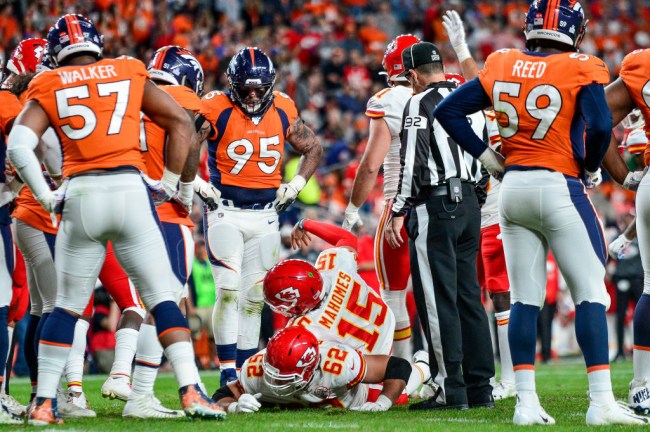 Patrick Mahomes suffered what looks to be a rather serious knee injury during the second quarter of Kansas City’s 30-6 win over Denver on Thursday night. At the moment it has been reported that he is expected to miss at least three weeks pending the results of an MRI on Friday.

The injury occurred during a 4th and 1 play and immediately following we could see Mahomes grabbing his knee. While the focus is certainly on the knee of last season’s MVP, it was an interesting situation as Mahomes actually landed on the back of his center, Austin Reiter, and laid there for quite some time.

Here's the moment that shocked #ChiefsKingdom after Patrick Mahomes was injured and had to leave the field during Thursday night's game against the Broncos. pic.twitter.com/6GeKgf69MJ

It’s quite the scene with the game’s most talented quarterback lying on top of his center’s back due to the fact he’s cautious to do anything with his leg that featured a dislocated kneecap.

Reiter spoke to the media after the game about what was going through his head during the moment.

“I think I was just yelling, ‘Get off me,’ but I didn’t realize it was him. And everybody’s telling me, I’m hearing from the refs, ‘Just stay still, stay still.’ And I’m just laying on my stomach face down. I just had to listen to the refs and not move. As soon as I realized it was his voice, I was like, all right, I’m not moving an inch.”

I’m sure Reiter went from angry because someone wouldn’t get off of him to extremely nervous in the snap of a finger after he realized it was his own quarterback that was unable to move off of his back. That’s certainly a story he can hold onto for the rest of his life.

According to Pro Football Doc, Mahomes’ type of injury typically requires surgery and if he and the Chiefs decide to go that route he could be looking at a six to nine-month recovery window.