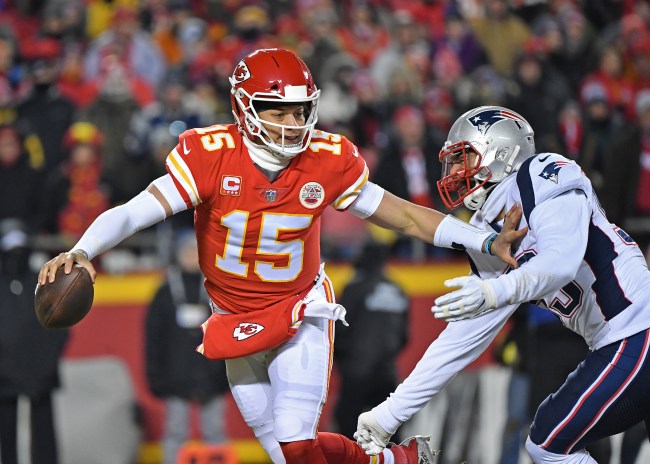 Patrick Mahomes had one helluva season for the Kansas City Chiefs in 2018. After taking over the starting quarterback gig for the incumbent Alex Smith, the second-year pro lit up the scoreboard — and fantasy football leagues — by tossing a league-high 50 touchdown passes, which helped him earn NFL MVP honors. It was a breakout year for the former first-round pick, but it all ended in heartbreaking fashion, with the Chiefs losing at home in the AFC Championship Game to the New England Patriots.

In two games against the Pats last season, Patrick Mahomes showed he wasn’t afraid of the mighty Bill Belichick-Tom Brady duo, as the 23-year-old threw a combined seven touchdowns and two interceptions. Unfortunately, both those games ended with losses.

With both the Pats and Chiefs expected to be contenders again this upcoming NFL season — which could lead to another epic showdown between the two teams — Peter King wanted to know what the Chiefs signal-caller learned during those two contests. What did Mahomes think he could do differently? What was the one aspect of his own game he wanted to change?

Talking to the longtime NFL writer, here’s what Patrick Mahomes said he needed to do better should his Chiefs meet the Pats at some point this season, starting with what he learned in those two losses.

What he learned in his two games against New England. Mahomes had way too many missed chances early in the two meetings with New England last year. Kansas City trailed in the regular-season meeting at Foxboro at the half, 24-9. Kansas City trailed at home in the AFC title game at the half, 14-0. In the two second halves, the Chiefs scored 62 points … but couldn’t dig out of the big halftime holes.

“You can’t make mistakes against Tom Brady and coach [Bill] Belichick and the Patriots the way we did in both games, early in the game. We obviously made things happen in the second half of both those games and gave ourselves chances to win. But if we just go in with the mindset of making adjustments even quicker, making sure that you go out there with a game plan and execute at a high level just from the beginning. They’re gonna keep executing, so you better too.” I relayed what Mahomes said to Reid. “Astute observation by a smart player. It’s always a short feel-out process against a championship team, fast and furious. We better learn that.”

As for what the reigning league MVP worked on this summer, Mahomes made it very clear; it was his decision-making.

Even after throwing for 50 touchdowns and just tossing eight interceptions all year, the Chiefs quarterback said that, in order to beat the Pats, he told King that he needs to play smarter and not always go for the big play all the time.

What he worked on this spring and summer. Decision-making, he said. “That’s the biggest thing for me—just knowing when to go for the shot and when to take the first down and move the chains, that’s something I’ve really worked on. Situationally deciding when to go for that scramble, trying to throw it all the way down the field and when to just complete the little short one and get the first down.”

Perfect example from that regular-season loss to New England: Mahomes had first-and-10 from the Pats’ 25 late in the half, down 24-9. He scrambled right, Dont’a Hightower with a grip on his jersey, and launched a deep shot into the end zone, right into triple-coverage by the Patriots. Duron Harmon picked it off. Mahomes didn’t make a lot of mistakes last year, but that one was terrible. “I feel like if I can just get better at situationally knowing when to take that shot and when not to, I think that’d be a big step in my game,” he said.

It’s pretty insightful stuff from a 23-year-old to critique his game and be honest with himself — especially when you consider Patrick Mahomes played lights out in those two losses against the Patriots. But, hey, it just goes to show that the kid could be a once-in-a-generational talent, and why he’s regarded as one of the best in the game; because he’s always trying to get better.