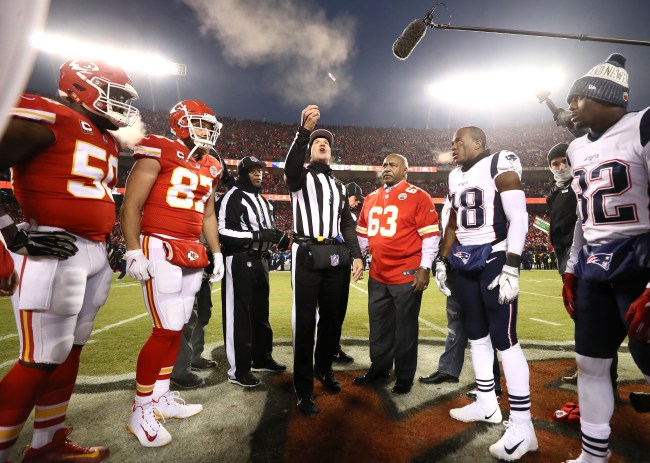 A couple of weeks ago, I wrote about some proposed NFL rule changes that could happen, specifically talking about one the Kansas City Chiefs had hoped to submit to the league following the team losing in overtime to the AFC Championship Game to the New England Patriots. The Chiefs beef? That they didn’t get a chance to possess the ball, with the Pats winning the coin toss and marching down the field for a game-winning touchdown. Bummer.

Well, according to Pro Football Talk, there were a few different NFL rule changes that could impact the league in a crazy way, with the Chiefs and their AFC rival Denver Broncos formally submitting proposals that will be reviewed by the Competition Committee. Here are a few details about those proposed rule changes.

First, the Chiefs believe that both teams should have an opportunity to possess the ball at least once in overtime, regardless of what the first team with the ball does. As the rule stands now, if the first team with the ball scores a touchdown, the game is over. If they kick a field goal, the other team gets a chance to either win with a touchdown or tie with a field goal. If things remained tied after each team gets a possession, it goes to sudden death for the remainder of the 10-minute period. It’s kind of dud rule, to be honest.

The second and third parts of the Chiefs’ proposed overtime NFL rule changes would be that overtime would be eliminated in the preseason — which makes sense — and that the overtime coin toss would also be eliminated, with the team who won the initial coin toss at the beginning of the game given the option to either kick, receive or defend a certain side. These are some major developments.

Not to be outdone, though, the Broncos had an even wilder proposed rule change that steals a chapter out of the newly formed Alliance of American Football (AAF). Per a separate Pro Football Talk article, Denver believes that a team trailing in a game should be given an opportunity to maintain possession of the ball after scoring without going for an onside kick. How? Well, according to Kevin Seifert of ESPN, it would entail a team converting a fourth-and-15 play from its own 35-yard line, with a team getting just one chance at trying it per game.

There's no such thing as an onside kick in the AAF. Instead you have the option to take the ball on your own 28 and face 4th and 12. It happened today:pic.twitter.com/snrzBSd5wO

While the Chiefs’ and Broncos’ ideas are pretty crazy, remember that they’re both just proposals, meaning that they would still need to go through various layers — and then voted on — to come into effect. But, hey, it’s a start.

In terms of the Broncos’ proposal, given the reception the AAF has gotten with a similar rule, it’ll be interesting to see if the NFL wants to give it a try. It would definitely make things a little wilder, while also eliminating the dangerous collisions that can happen during an onside kick.

Pro Football Talk mentions that there are a total of nine NFL rule changes that the Competition Committee will consider after a number of proposed ideas. Let’s see how innovative the league really wants to be here.