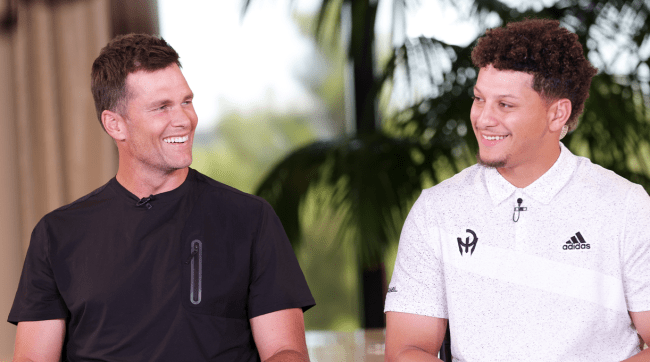 If you think fans and other NFL players are getting tired of hearing about Tom Brady’s rocky relationship with his wife Gisele Bundchen, just imagine 18 more years of Brittany, Jackson and Randi Mahomes?

That’s not going to happen though, right?

Well… Patrick Mahomes was asked this week if he can see himself playing until he’s 45 like his opponent this week, Tom Brady, and he didn’t rule it out.

“I want to play as long as I can play, and I can still have a chance to help the team get better,” Mahomes told the media. “Obviously, it’s hard to play until you’re 45 years old, and I don’t want to be out there just hanging on. You see what Tom is – he’s still playing at a very high level. I think that’s why it’s hard for him to kind of give it up – when you’re playing at a high level you don’t want to leave it.

“And so for me I’m gonna try to keep my body in the best shape possible and as long as they let me play and I can play at a high level I’ll be out there.”

No way he plays another 18 years though, right?

He does still have nine more seasons on his current contract with the Chiefs, so he will be 36 when that expires.

Mahomes also added while talking about Tom Brady, “I mean it’s special to see the things that he’s done in this league. The way he was able to change the position, the longevity of great success – I mean that’s the crazy part – you look at his career and there’s never really been a down year. He’s always been great and had a great season and found ways to get even better. He’s done stuff off the field that hasn’t impacted him on the field, but still made his legacy even greater so it’s always a great opportunity for me and our team to go up against a great quarterback and really see where your team is at.”