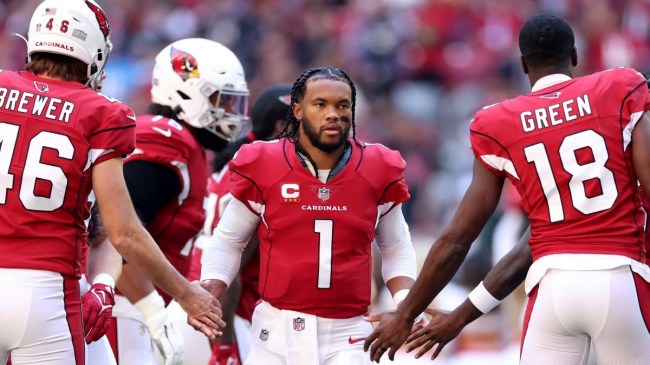 Arizona Cardinals star quarterback Kyler Murray signed one of the most lucrative contracts in NFL history in the offseason. Since then, just about anything that could go wrong, has gone wrong for the two-time Pro Bowler. Murray was immediately put on blast for a hilarious independent study clause in the contract.

Murray then held a press conference denouncing the clause, and the Cardinals quickly removed it from his contract. But now they’re probably wishing they hadn’t. The Oklahoma product has struggled this season, and so have the Cardinals. Murray has completed 66.3 percent of his passes for 2,359 yards, 14 touchdowns and seven interceptions and Arizona is just 4-8 through its first 12 games.

The star quarterback recently called out Cardinals coaches after a 25-24 loss to the Los Angeles Chargers. Murray was just 18-for-29 for 191 yards, two touchdowns and an interception in the contest.

That didn’t sit well with former teammates Patrick Peterson, who currently plays for 9-2 Minnesota Vikings. Peterson said that Murray only cares about himself, which led to the quarterback quickly taking to Twitter to defend himself.

Now it appears that Peterson is walking back his comments and attempting to bury the hatchet between the two,.

What I meant by my comment was when you’re a franchise quarterback you have to carry yourself a certain way,” said Peterson, who was teammates with Murray for one season with the Cardinals in 2020. “So if you’re having bad body language, pouting, moping on the sideline, what type of energy do you think feeds off to your teammates?

“That’s what I meant about Kyler. He cares about himself because he’s not putting the team first. When you make a bad throw, and you come off to the sideline, you’re dropping your shoulders, how do you think the defense feels? If our starting quarterback don’t have any energy, no fire, that we can win this game, how can we? That’s what I meant about Kyler caring about Kyler. I didn’t mean any disrespect, in any fashion or form. And I might not be his mentor, but these are the things, tips, that can help him be a better football player in the long run.” – via ESPN

Peterson also added that he didn’t have Murray’s phone number prior to this week, but that he’s since obtained it and reached out to the QB. Though he’s yet to receive a response to his text.

“I do look forward to talking to him because I see a ton of talent in him,” Peterson said. “And those mannerisms are alarming. I’m just saying something that most people may be afraid to tell him. It’s no secret. Everybody sees it. You see it every time they’re on television. You see Kyler Murray pouting. Cursing out the head coach, calling out the offensive scheme. I didn’t say that. He did.

Peterson and the Vikings to clinch the NFC North division title with the win this week and a Detroit Lions loss to the Jacksonville Jaguars.