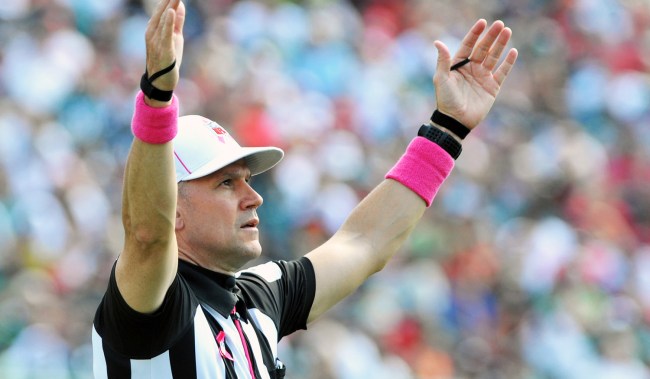 Clete Blakeman. He might not be public enemy number one in New England, but he’s probably somewhere in the top five.

That being said, the former backup quarterback for the Nebraska Cornhuskers turned NFL referee, might have jumped up to the top spot this week after the announcement that he would be working the Patriots vs. Chiefs AFC Championship Game this coming Sunday.

For you see, Blakeman also worked the infamous Deflategate game as an alternate official, and had a hand in measuring the PSI in the footballs that ended up leading to Tom Brady serving a four-game suspension to start the 2016 season.

Oh, and according to CBS Boston, Blakeman is also responsible for…

“…his famed non-call at the end of a Patriots-Panthers Monday Night Football game back in 2013 — a comically bad decision to pick up a flag that had been thrown on an obvious infraction, which cost the Patriots a chance to take a snap at the 1-yard line with a chance to win the game.”

Blakeman also worked the AFC Championship game in 2018 that featured a Patriots win – and again caused controversy when he was spotted patting Brady on the shoulder after the game.

If Walt Coleman was never assigned to a Raiders game after he properly applied the Tuck Rule in the famed Snow Bowl, then how and why should any official who was involved in the farce that was the DeflateGate air pressure measurement process and whose testimony was instrumental in the NFL calling for significant punishment on the team and the quarterback ever be assigned to another Patriots game — let alone two consecutive conference championship games?

Actually a semi-valid question, but this is next statement is the one that every Beantown bro will referencing if the Pats end up losing a close game on Sunday night.

As a referee, Blakeman has called eight Patriots games since 2010; New England is 3-5 in those games, good for a .375 winning percentage. The Patriots are 124-32 in all other games during that span, for a winning percentage of .795.

Fire up the conspiracy theories!!!

So Clete Blakeman is officiating the AFC Title game between the Chiefs and Patriots. He was a major player in the deflategate charade. An anti-Patriots conspirator. The game has already begun and the Chiefs are winning it. Pats are gonna be playing 11 on 18 out there.

You're really gonna put Blakeman on the Patriots game? Welp… might as well not play the game. https://t.co/J4GJVW7fvB

I dare Goodell and Blakeman to try something again. #Patriots

Clete Blakeman is the ref for Sunday? 😣😣😣 We're screwed! pic.twitter.com/IuZ1amBGE7

Clete Blakeman has reffed the Deflategate game and that Jets overtime game in 2015 where he messed up the coin toss. Why does this man keep getting to ref Pats games

Clete Blakeman is reffing the #AFCChampionshipGame . Are we fucking serious NFL? Gotta be shittin me. #Patriots

@nflcommish assigned Clete Blakeman as the #AFCChampionshipGame Ref. The @nfl really doesn’t want the Patriots to go to another super bowl 🤔😂

On the other hand…

Blakeman to the AFC ? The same guy that congratulated Brady after a win a couple years ago ? … seems legit

Eh, I’m sure it will all work out fine, right, Saints fans?