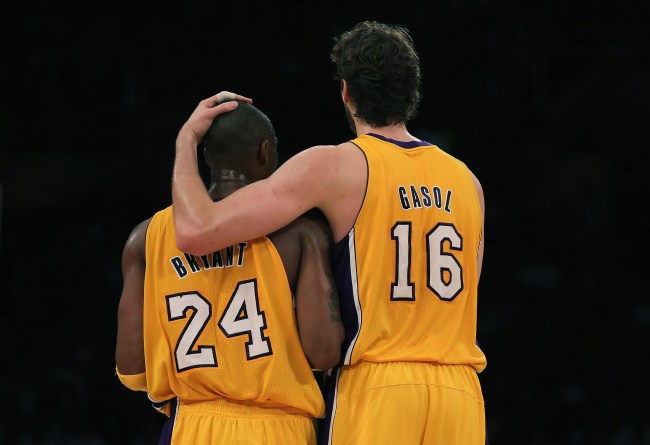 The pain and despair Vanessa Bryant must be suffering through in the wake of the January 26th accident that took the lives of her husband and 13-year-old daughter is hard to conceive.

In the eight months following the tragedy, people from all corners of the earth have attempted to lift some of that burden by way of tributes, support, and memorials.

No one has been more present than Pau Gasol.

Gasol’s latest tribute to the man he called “the big brother that I never had” came as he and his wife, Catherine McDonnell, birthed a baby girl over the weekend.

The two-time NBA champion named his very first child Elisabet Gianna Gasol, the middle name an ode to Kobe and Vanessa’s daughter who perished in the helicopter crash.

Our little one has finally arrived!! The delivery went really well and we couldn’t be happier!! Elisabet Gianna Gasol 😍, a very meaningful name for our super beautiful daughter!! ❤️👨‍👩‍👧 #girldad pic.twitter.com/rmXWk0BTFz

What’s more, Vanessa Bryant confirmed Gasol’s newborn as her goddaughter, responding with her own post, “my goddaughter is here!!!! Congratulations @paugasol @catmcdonnell7 Love you 3 so much! So touched by your request to honor my Gigi. Can’t wait to hold Elisabet Gianna Gasol.”

Vanessa Bryant shared that she is the godmother to the Gasol’s newborn child 💛💜 pic.twitter.com/MzbfKpZBzU

In May, in the lead-up to the 10th anniversary of the Lakers winning back-to-back titles with the duo, Gasol spoke to ClutchPoints about how much Kobe meant to him.

“To me, he was kind of the big brother that I never had,” Gasol said of Bryant. “A person that I could count on, that I could rely on. That I could reach out, and we could talk, and we would just enjoy it.

“He couldn’t make boys, so it was on me to make boys. We would just talk about stuff. It was two very close people that appreciated each other being close and being human. That’s kind of what he meant to me.”

Congrats to Pau and Catherine on their newborn and doing their part to keep the memory of Kobe and Gianna alive.

I still refuse to believe it… it still feels like a nightmare that I can’t wait to wake up from… but if this nightmare continues, I will do what I can to keep your legacy going and your lessons present in everything I do. pic.twitter.com/n3DL1NHjko