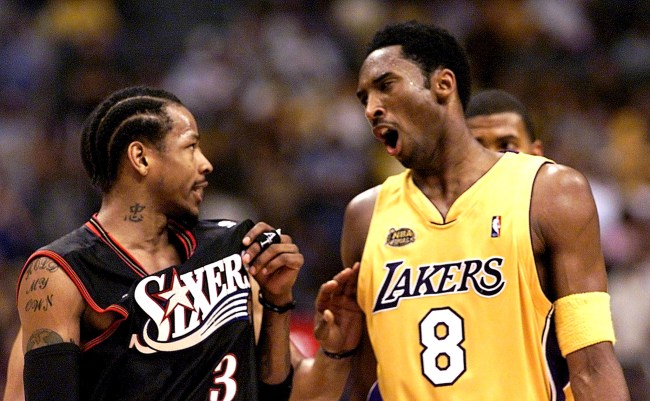 Sunday would have been Kobe Bryant’s 42nd birthday. Because of that a multitude of tributes were shared by those who knew the Lakers great or were inspired by him.

And outside of Kobe’s wife Vanessa, who obviously knew the man better than just about everyone, perhaps no tribute was more poignant than the one provided by Kobe’s contemporary in the NBA, Allen Iverson.

Iverson and Kobe both entered the NBA in the same year, 1996, when Iverson was the first overall pick in the draft and Kobe was taken 13th.

Back when Bryant passed away in the terrible helicopter crash that claimed eight other lives including Kobe’s daughter Gianna, Iverson was one of the people who appeared to be hit the hardest.

So, on Monday, 8/24, aka Mamba Day, Iverson penned another heartfelt tribute to the man who almost 25 years later is still one of his inspirations.

Writing in letter form for The Players’ Tribune, Iverson began, “This is going to be tough. But I need to get this off my chest. Everybody clear out for me and Kobe.”

“That’s when I knew you were a kindred spirit.”

Iverson also spoke of the incredible work ethic he saw from the Mamba.

“You’re probably the only dude in the history of the game where the mystique wasn’t exaggerated. The Mamba was no myth, man. It didn’t even do you justice. One, two, three in the morning, we knew where you were.

“Me and you, every single time we stepped on that floor, we were going to war. But it wasn’t an animosity thing. There was never any beef. It was like heavyweight fighters beating the hell out of one another. And then at the bell, it’s nothing but love and respect. Greatness needs company, and we needed each other. Mike needed Prince like Prince needed Mike. Tyson needed Holyfield like Holyfield needed Tyson.”

He goes on to give his opinion on the G.O.A.T.

“Any time anybody asks me, ‘Who’s the greatest of all-time?’

“Nobody was tougher than you. Nobody got more out of me. We’re linked forever in this game — in this life.

Iverson isn’t the only one.