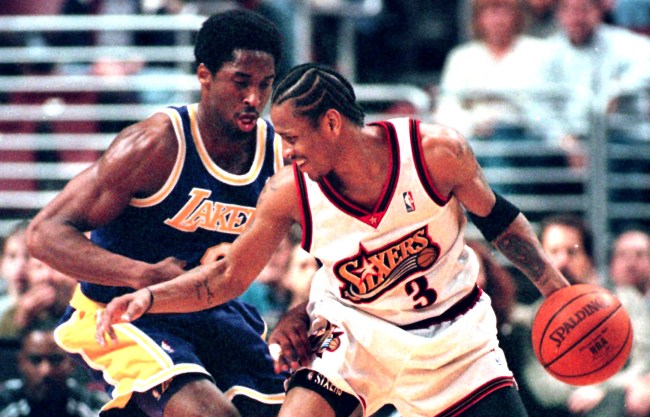 The stories, tributes, and outpouring of grief following the shocking death of Kobe Bryant in a helcopter crash on Sunday have been heartbreaking, poignant, funny, tragic, inspirational, and touching.

Kobe touched so many people, regardless of whether or not they actually met him, but those who played with and against The Black Mamba in the arensas of the NBA knew the man like very few others.

One of those people who spent his entire 14-year career playing in the NBA at the same time as Kobe Bryant is Allen Iverson.

Iverson and Kobe both entered the NBA in 1996 when Iverson went first overall in the draft that Kobe was taken 13th by the Charlotte Hornets then traded to the Los Angeles Lakers.

Bryant was just 17 at the time (his parents had to co-sign his first contract with the Lakers) and Iverson went on to be selected as the NBA Rookie of the Year in the 1996–97 season, while Kobe came off the bench in L.A. but did win the 1997 NBA Slam Dunk Contest.

During their rookie seasons, the young Bryant made such an impression on Iverson, who was 21 at the time, he still recalls it now over 20 years later.

Writing on Instagram, Iverson said, “Words cannot express how I’m feeling today. The only 2 words that ring in my head – devastated and heartbroken. I cannot seem to shake this feeling no matter what I’ve tried to do since hearing this yesterday.”

“People will always remember how we competed against each other in the league, but it goes much deeper than that for me. The story of us being drafted in arguably the deepest class of its kind ever in the history of the NBA can be debated for many years to come. However, his generosity and respect for the game is something that I witnessed first-hand every time we stepped on the dance floor to compete.”

“It’s one memory of him that I can’t stop thinking about. It was our rookie season and my first trip to LA for a game against the Lakers. He came to my hotel, picked me up and took me to a restaurant. When we returned before he left, he asked me, ‘What are you going to do tonight?’ My reply was, ‘I’m going to the club, what are you going to do?’ He said, ‘I’m going to the gym.’ That is who he always was, a true student of the game of basketball and also the game of life. He prepared relentlessly. There is something we can all learn from the “Mamba” mentality and from the way my brother lived his life. He will always have my respect as a competitor, as a friend, as a brother.”

“My thoughts and prayers are with his wife Vanessa, their children and the families of all the victims of yesterday’s tragedy. As a father, I cannot wrap my head around how they must feel.”

“We are not okay. But we will find strength to pull through this together because that’s what Kobe would want us to do.”