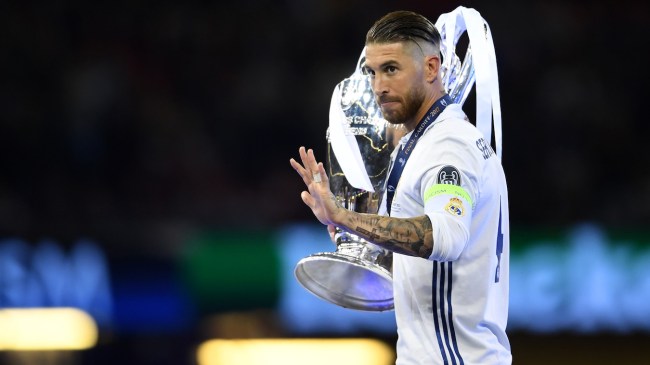 The news of Kobe Bryant’s tragic passing has impacted people all across the globe, especially elite athletes, as Bryant’s legendary “Mamba Mentality” likely served as an inspiration to many who make their livelihood in professional sports.

Real Madrid, one of the most popular sports franchises on the planet, paid their respect to the late Lakers legend earlier today by observing a moment of silence prior to their practice.

In addition to the moment of silence, Sergio Ramos — the iconic captain of both Real Madrid and Spain — showed up to training wearing a #10 Kobe Bryant United States National Team jersey.

Even in death, Kobe Bryant remains remarkably capable of achieving the impossible: making Sergio Ramos seem likable. Only Kobe Bryant could pull off a feat so monumental.

Real Madrid is far from the only soccer club to pay respect to the basketball legend, as tons of high-profile clubs and players took to social media to express their sadness about the loss of the sporting icon.

Our thoughts and condolences are with his loved ones at this extremely difficult time ♥️ pic.twitter.com/1IDAGRqafS

We are shocked and saddened to learn of the tragic passing of Kobe Bryant.

The world of sport has lost a true legend. We send our heartfelt condolences to the friends and families of all the victims at this terribly sad time. pic.twitter.com/ZuNk5SClEe

Everyone at Manchester City is shocked and saddened to hear of the death of Kobe Bryant.

He was a true sporting icon and transcended the sport of basketball.

Our thoughts are with Kobe Bryant's friends, family and the entire Lakers organisation during this tragic time 💙 pic.twitter.com/Bg9cQN83ZG

Bryant, just 41-years-old, passed away in a helicopter crash around 9:52 a.m. PST on Sunday, January 26. In addition to Bryant, his 13-year-old daughter Gianna Marie was one of the nine victims in the crash.

The response from around the globe has been powerful and immediate, as people all around the world have paid tribute to Bryant. You can find all of the emotional tributes to Kobe here. Additionally, you can find further tributes from the global soccer community below.

So sad to hear the heartbreaking news of the deaths of Kobe and his daughter Gianna. Kobe was a true legend and inspiration to so many. Sending my condolences to his family and friends and the families of all who lost their lives in the crash. RIP Legend💔 pic.twitter.com/qKb3oiDHxH

After scoring for PSG, Neymar flashed No. 24 to pay tribute to Kobe Bryant, who died Sunday morning in a helicopter crash. pic.twitter.com/EOrk3cZAUd

My heartfelt condolences go out to the families and friends of Kobe and of those who died in the terrible accident.

RIP Kobe.
My thoughts go out to your family. 😥 pic.twitter.com/iFBdfayBXQ

A true inspiration in the sporting industry. RIP legend. 💔👑 pic.twitter.com/riqBbwRfDc