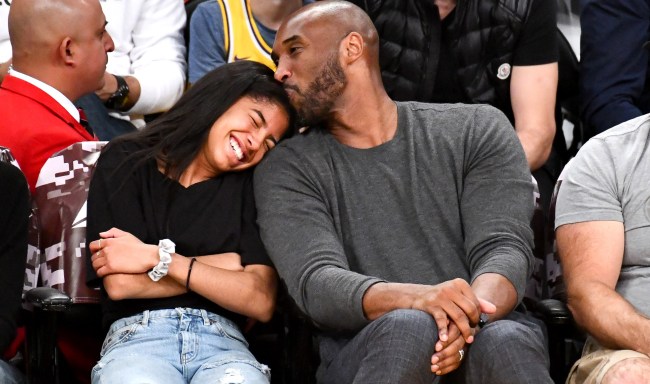 The stories that have been being shared by those who either knew Kobe Bryant or were just inspired by the man have been coming fast and furious in the wake of his, his daughter Gianna, and seven others in a shocking helicopter crash on Sunday.

The tragedy is made even worse due to the fact that the main reason Bryant used a helicopter so often in his daily life was so he could spend as much time with his kids as possible.

Derek Jeter, in his tribute to Kobe, said, “I’ve seen him win gold medals and championship rings. But I’ve still never seen him look as happy, in those big moments on the court, as he looked the other day off of it: with an arm around Gigi, sitting courtside, and just….. talking.”

It’s a common theme when those who were close to The Black Mamba discuss what they will remember about the future Hall of Famer.

It’s even a theme for those who weren’t that close to Kobe, but maybe just met him one time, as evidenced by a story told by ESPN anchor Elle Duncan Monday night.

“It’s likely that you’re hearing many personal anecdotes about Kobe Bryant, so here’s mine,” Duncan began during SportsCenter. “I met Kobe one time, backstage at an event for ESPN in New York. And I saw him, and I thought, ‘Oh my gosh. That’s Kobe. I gotta get a picture for the ‘Gram. I didn’t get it for a few minutes, because, as I approached him, he immediately commented on my rather large eight-month pregnant belly. ‘How are you?! How close are you?! What are you having?!’ ‘A girl,’ I said, and he then high-fived me. ‘Girls are the best.'”

“I asked him for advice on raising girls,” she continued, “seeing as he quite famously had three at the time. He said, ‘Just be grateful that you’ve been given that gift because girls are amazing. His third daughter, Bianka, was about a year-and-a-half old at the time, so I asked if he wanted more children. And he said that his wife, Vanessa really wanted to try again for a boy, but was sort of jokingly concerned that it would be another girl. And I was like, ‘Four girls, are you joking? Like, what would you think? How would you feel?’ And without hesitation he said, ‘I would have five more girls if I could. I’m a girl dad.”

“When it came to sports, he said that his oldest daughter was an accomplished volleyball player and that the youngest was a toddler, so TBD,” Duncan added. “But that middle one, he said, ‘That middle one was a monster. She’s a beast. She’s better than I was at her age. She’s got it.’ That middle one, of course, was Gigi.”

“When I reflect on this tragedy and that half an hour that I spent with Kobe Bryant two years ago, I suppose the only small source of comfort for me, is knowing that he died doing what he loved the most: being a dad. Being a girl dad.”