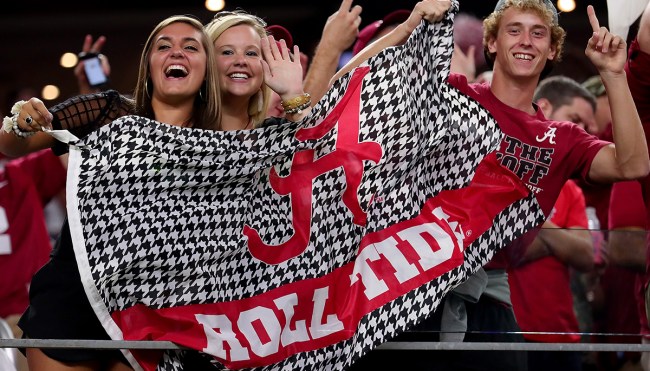 On Monday, the Georgia Bulldogs earned the right to hoist the national championship trophy with a victory over Alabama to bring a title back to Athens for the first time since the 1980 season (where their fans reacted accordingly).

Crimson Tide fans were understandably less than thrilled with that particular development, but it’s pretty hard to feel bad for any of them when you consider the team has secured six trophies of their own under Nick Saban’s watch since 2009.

Georgia also capped off the season as the unanimously top-ranked team in the country in the formality that is the final AP Poll of the year, but on Thursday, one impressively delusional Alabama supporter called into The Paul Finebaum Show to take issue with that while arguing why Alabama is really the best squad in college football despite losing to the best squad in college football by 13 points.

Fred From Alabama has entered the chat…and he's refusing to acknowledge Georgia's victory in the CFP Championship pic.twitter.com/sCulzJLBxX

On Thursday, “Fred from Alabama” presented his argument by saying, “When you have two 1,000-yard receivers off your ball team, they didn’t beat a good team, and if anyone from Georgia thinks that they’re the #1 team, that’s horse.”

After allowing Fred to plead his case, Finebaum responded by asking if there are “family members that look after you,” and after Fred confirmed there, the host replied, “I don’t like to say what I’m about to say. but you need help if you think that.”

However, Finebaum was far from the only person to roast Fred for his truly scorching take.

There’s a 99.9% chance that Fred and my Uncle Gary have, at some point, gotten into a fistfight over college football at a truck stop https://t.co/6fv7k0afWY

I always enjoy drinking the tears of my enemies, but recently they taste a little more…salty. https://t.co/Etbuq2LJHg pic.twitter.com/Wyqj0aMFDP