Was Paul George Referring To Anthony Davis In His Explanation Of Pacers Trade? 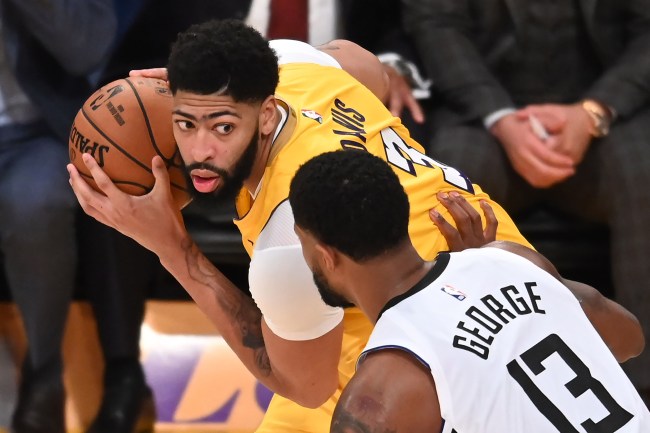 Paul George sort of surprised a lot of people the other day when, on the Knuckleheads podcast with Quentin Richardson, the six-time All-Star revealed the real reason why he wanted to be traded by the Indiana Pacers a couple of years ago. Stating it was because the franchise didn’t pursue the “best power forward at the time” — whom George said expressed interest in playing with PG-13 in Indianapolis — George decided it was time to move on.

Hey, it totally makes sense, right? At the time, Paul George thought he could team up with another superstar and make a run at a title. The fact that he thought the Pacers didn’t “want to win” after ignoring the interest from the unnamed power forward says a lot — and it ended with the two sides parting ways during the 2017 offseason.

But here’s the real question: Who was the power forward George was referring to?

PG seems pretty certain that the Pacers could've gotten this player. I highly doubt the Pelicans would've traded AD with three years left on his deal, especially after adding Boogie. I don't doubt their interest in a partnership, but there are holes in this story if it's him.

Since there are a bunch of theories floating around about the superstar Paul George was referencing, I decided to offer up some names of guys PG-13 could’ve been talking about — all of whom had been involved in trade rumors around that time.

The most logical of any of the players, Anthony Davis is, arguably, the best power forward in basketball, so it makes sense that Paul George referred to him in that way. But was AD really the guy George was referencing? If so, it sure seems like it would’ve been a long shot for the Pacers to get him at the time.

While Davis was playing for the New Orleans Pelicans in 2017 — and was looking for an extension in the coming years — what could the Pacers possibly have offered to land the All-Star big man? Davis had two years left on his contract and, seeing how things played out, he probably wasn’t going to commit to another small market; which Indiana is.

The best the Pacers could’ve offered in 2017 for Davis would’ve probably been Myles Turner, C.J. Miles, some expiring contracts and a future first-rounder or two. That’s enticing, but not nearly as tasty as the package the Pelicans ultimately received from the Lakers during the 2019 offseason. So it’s tough for George to blame the Pacers’ organization for not aggressively pursuing AD; assuming he was the guy George wanted.

Seeing as how Blake Griffin was traded during the middle of the 2017-18 NBA season, there’s some speculation that Paul George was referring to the former No. 1 overall pick. But was Griffin really regarded as “the best power forward” in the game? Probably not.

Still, Griffin averaged a healthy 21.6 points and 8.1 rebounds per game during the 2016 season, and, at the time, was still just 28 years old and entering his prime. Some of the lingering injuries he’s experienced since being traded to the Detroit Pistons weren’t yet known, so, who knows, maybe George really was talking about Griffin?

Could a Blake-George duo been capable of making a run at a title? Doubtful; but it would’ve been fun AF to watch.

He may have fallen off the map recently because of some seriously bad luck in the injury department, but, back in the summer of 2017, DeMarcus Cousins was one of the most dominant big men in the league.

After being traded during the 2017 season from the Sacramento Kings to the New Orleans Pelicans — where, ironically enough, he teamed with Anthony Davis for a talented big man duo — Boogie may have been the guy who Paul George had his eyes on during the offseason.

While it would’ve been strange to see Cousins be traded twice in a matter of six months or so, had the big man expressed interest in re-upping with the Pacers if he was dealt to Indy — remember, he became a free agent in 2018 — maybe George and Cousins could’ve helped build a championship-worthy team for a few years together.

Since being traded to the Cleveland Cavs for Andrew Wiggins in 2014, Kevin Love’s name has constantly been thrown around in trade rumors. And, while K-Love was one of the main pieces rumored in a blockbuster deal that could’ve brought Paul George to Cleveland to pair with LeBron James in the summer of 2017, could it have been possible that the five-time All-Star was the guy George hoped to play with in Indy instead?

It’s a bit of a stretch, considering PG-13 referenced the “best power forward at the time” when divulging details of his 2017 trade request. Still, maybe Love had been pissed about being overlooked playing alongside James in Cleveland and wanted out. Maybe he felt disrespected. Maybe he was going behind LeBron’s back and wanted to go to an Eastern Conference rival to knock James off his pedestal. All of those things could’ve happened, but it’s doubtful they actually did.

The other hitch 👇🏽…dealing for AD wasn’t that simple. If AD wanted to come to Indy and stay he would’ve gotten every penny allowed by the CBA. The other team has to value wha you’re offering above all others https://t.co/oyUMwWbiVQ

Look, the consensus is that Paul George was referring to Anthony Davis. But, as stated above, there are a few other names from 2017 who very well could have been the power forward who was looking to team up with PG-13 on the Pacers — but, sadly, we may never know the real answer.